Winter Quarters: What Did Civil War Soldiers’ Huts Look Like Inside?

Like a lot of people right now, I’m sweeping around the dumpster of unfinished projects and loose ends. This blog is one way I’ve been keeping up with research that is disconnected (or at least adjacent) to my job and dissertation, and this post is one example of what still lurks in my research files. I’m lucky to be in a position to go through those files and do some writing amid everything else that is going on.

Since I was a kid, I’ve been interested in Civil War soldiers, and for a while now I’ve been collecting references and images to their domestic lives. Years ago, I wrote a post here about what Union soldiers carried in their pockets. For months each winter during the War, many soldiers settled into log huts in massive encampments. If you’re a Revolutionary War fan, think Valley Forge but on steroids. These huts took all different forms, and there’s no shortage of images and descriptions of how they looked on the outside. There are some great studies about how soldiers built them and of what remains of them, including by eminent archaeologists. It’s sometimes harder to figure out what they looked like inside. I’ve seen a handful of soldiers’ letters (most notably at the William L. Clements Library at the University of Michigan) where the authors sketched the interiors of their huts, and I’ll share a few other images here. Along with written records, these sources help us answer questions about the lived experience of these domestic spaces. How did they look inside? Were they decorated with mementos of loved ones or wartime trophies? How did it feel to call them home?

John D. Billings devoted most of a chapter to “Life in Log Huts” in his iconic memoir, Hardtack and Coffee. It’s the most detailed and lengthy description of huts as domestic spaces that I've seen, and it’s worth reading in its entirety. Billings tells us about fireplaces, bunks, hardtack-box tables, sardine-tin lanterns, and table settings. “A hardtack box,” he wrote, “nailed end upwards against the logs with its cover on leather hinges serving as a door, and having suitable shelves inserted, made a very passable dish-closet.” (1) 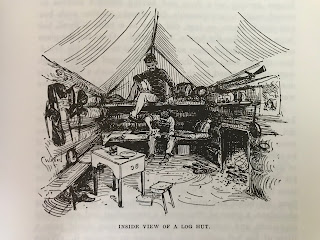 From Billings, Hardtack and Coffee, 75.

In Union veteran C.W. Bardeen’s 1910 memoir, A Little Fifer’s War Diary, he remembered that “In the absence of candles we imitated the old Roman lamp, by filling a sardine box with grease of some kind, and igniting a rag floating in it.” (2)

Confederate John Casler remembered that in late 1863, “We went to work in earnest and put in a nice log shanty, covered it with clapboards, went to an old barn near by and got some planks for a floor and bunks, built a stick chimney, and were prepared to live in high style.” (3) 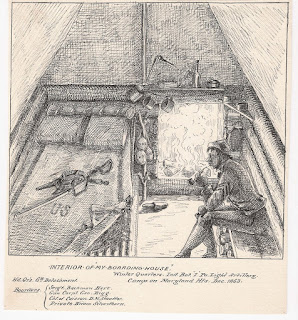 Harry Kiefer, a drummer boy with the 150th Pennsylvania, remembered: “The last cabin we built – it was down in front of Petersburg – was a model of comfort and convenience: ten feet long by six feeet wife and five high, made of clean pine logs straight as an arrow, and covered with shelter tents; a chimney at one end, and a comfortable bunk at the other; the inside walls covered with clean oat-bags, and the gable ends papers with pictures cut from illustrated newspapers; a mantelpiece, a table, a stool; and we were putting down a floor of pine boards, too, one day toward the close of winter, when the surgeon came by, and looking in, said, - “No time to drive nails now, boys; we have orders to move!” But Andy said, - “Pound away, Harry, pound away; we’ll see how it looks, anyhow, before we go!” (4) 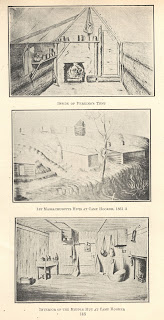 Confederate Barry Benson wrote of his winter quarters in 1862-63 had “a floor laid of poles laid close together and raised a foot or so off the ground… Our bed was of broomstraw, which I always preferred to wheat straw, as not breaking up so badly.” (5) 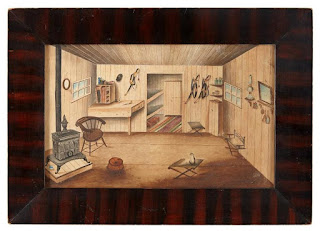 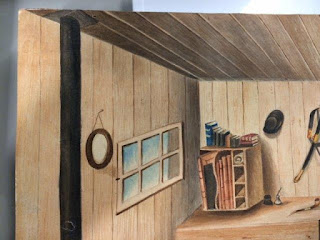 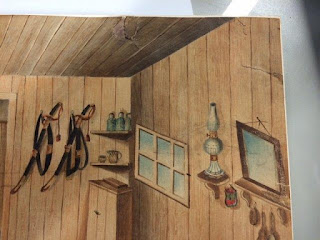 These images are of an unsigned and undated sketch sold several years ago at Freeman’s Auction (Philadelphia) which I believe show the winter quarters of a group of Civil War officers.

But, of course, winters came to an end and campaign season – and life in tents – began each spring. Union veteran Abner Small remembered what this meant for the little homes soldiers had built. “This doomed all our furniture, the tables and chairs and desks made out of barrels and boxes, all our handy aids to housekeeping, and all the things the men had fashioned to while away the time.” (6)

Life in log huts, after all, no matter how homey, was temporary.