What Did the Union Soldier Carry in his Pockets?: A Material Culture Analysis of the Report of Samuel Weaver, Gettysburg, 1864

Some years back, Civil War historian and sculptor Michael Kraus introduced me to a small gem of a document, the report of Samuel Weaver, contained within Report of the Select Committee Relative to the Soldier's National Cemetery (Harrisburg, Singerly & Myers, State Printers, 1864; you can read it online here). At the time, I was interested primarily in Weaver's description of Confederate knit undershirts, as I was encountering descriptions of such garments worn by prisoners-of-war on Johnson's Island, Ohio. The book sat in the back of my mind, however, waiting patiently for the more thorough attention it deserved.

Weaver supervised the exhumation and identification of bodies at Gettysburg preceding their placement at the new National Cemetery between October 1863 and March 1864. Weaver apparently cared deeply about his job, and closely monitored each grave opening, although his work extended only to the 3,512 Union bodies he found and not to thousands more Confederate graves. He described the process:

"There was not a grave permitted to be opened or a body searched unless I was present. I was inflexible in enforcing this rule, and here can say, with the greatest satisfaction to myself and to the friends of the soldiers, that I saw every body taken out of its temporary resting place, and all pockets carefully searched; and where the grave was not marked, I examined all the clothing and everything about the body to find the name... In these scrutinous searches, the names of a number of lost soldiers were found. They were discovered in various ways. Sometimes by the pocket diaries, by letters, by names in Bible, or Testament, by photographs, names in pocketbooks, descriptive list, express receipts, medals, names on some part of the clothing, or on belt, or cartridge-box, &c., &c."

Along with his report, Weaver attached a list of the objects recovered from 275 bodies (pages 43-52), the sort of small things, though "valueless to others, which would be of great interest to friends." Indeed, the list of items includes both valuables, such as cash and watches, as well as items I'm surprised Weaver saved at all, like small gun tools and toothbrushes. As such, Weaver's list provides an interesting opportunity to consider the relative commonality of certain belongings among Civil War soldiers.

The table below enumerates how many soldiers carried a given item (in cases where a soldier carried more than one of a given object, I counted him only once). In an effort to humanize this otherwise impersonal list of objects, I've linked each category to an image, many from the Liljenquist Collection, a recent gift to the Library of Congress.

So, what sort of objects mattered to Union soldiers?
The frequency of combs among the dead shouldn't surprise us. Civil War soldiers weren't any more vain than we are (only twelve carried mirrors, or "glasses"), but they were a lot lousier. I suspect that most of these combs weren't for styling elaborate hairdos but for catching body lice and their eggs ("nits"). Here's one hard rubber example, recovered from the ironclad U.S.S. Cairo. 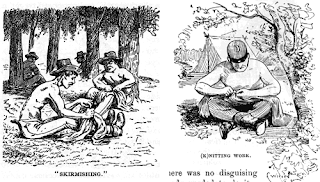 "An army travels on its stomach," said Napoleon, and it's evident in Weaver's inventory that tableware remained an important accessory during the Civil War. Most of the knives mentioned by Weaver were almost certainly pocketknives, although one man carried a "table knife." Spoons and forks were also common, but it's interesting to note that Weaver didn't collect any cups or plates from the bodies. 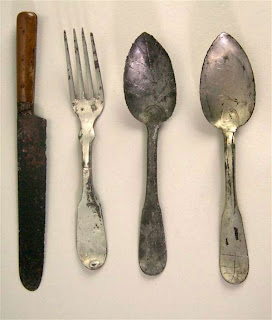 Tableware from the U.S.S. Cairo, including a table knife, fork, and two spoons, from here. 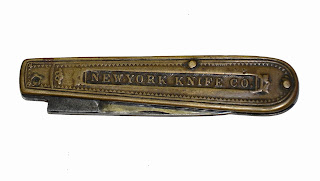 A common type of soldier's pocketknife knife, from here. Bone and shell handles were also common. One mentioned by Weaver had "three white sets in handle."

And, of course, no army is complete without paperwork. The Gettysburg casualties carried all kinds. Some of it was personal, including letters, diaries, and religious and secular books. Pennsylvanian Matthew Johnson carried an express (shipping) receipt, and James F. Bedel of the 7th Michigan Infantry had a muster roll and a certificate for four months' back pay. Bedel wasn't the only one concerned about money; thirty-one of Weaver's dead were carrying coins or bills, including some with Confederate currency. Solomon Lesser of New York had "$30 in gold, $6 in greenbacks, and certificate of deposit for $300 in German Savings Bank, New York." They kept their cash in purses and pocket books. Pencils, inkstands (inkwells), and stamps added to this assemblage, although, interestingly, Weaver did not recover any pens.

Twenty of Weaver's soldiers carried "likenesses" and photograph, small mementos of friends at home. An unknown New Yorker carried an ambrotype of his wife and two daughters, and another unknown soldier had a photograph of a man named Charles Keller, taken on the fourth of July, 1859. Here's a photograph of a dashing young Union man with another bit of material culture common to Weaver's inventory, a pipe (I've listed pipes along with match boxes, snuff boxes, and tobacco boxes under "tobacco ephemera" above). 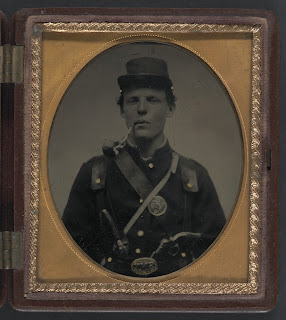 Unidentified Union soldier, from the Liljenquist Collection at the Library of Congress, here.

The soldier above is well-armed with a knife and revolver, photographer's props rather than his own weapons. Then and now, nevertheless, much of a soldier's life revolved around maintaining his gun. Prominent in Weaver's inventory are gun wrenches, wipers (a tool, also known as a worm, used to clean barrels), pivots (I'll admit, I'm not sure to what sort of tool this refers), vices, and screw drivers. Corporal Andrew DeWitt, 120th New York Infantry, carried "bullet moulds," probably like this one, used for making revolver bullets.

Civil War soldiers carried a limited range of weapons, but their choice in personal adornment sometimes seems unlimited. Such was the case with Weaver's soldiers' jewelry. Some wore religious items, like Pennsylvanian Patrick O'Conner's cross and medal or a peculiar "ornamental article, consisting of a cross, figure of the Saviour, Virgin Mary, Apostles, &c." found on one man. Some jewelry was patriotic or partisan, like GeorgeMcCleary's flag breast pin or New Yorker David Holland's McClellan pin.  Others carried a jet heart, a gold locket, a breast pin, or a shawl pin. One man wore gold earrings. Five men had either a watch, a watch case, or a watch chain (is the absence of a watch on that last body evidence of looting before Weaver found it? Or perhaps a friend removed the watch after the battle to send to the dead man's family?). Twenty-two wore rings, some more than one. Pennsylvanian Isaac Eaton's ring had two red sets. 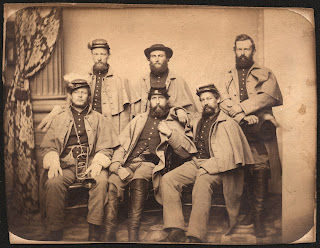 I'll admit, this image is only tangentially related to jewelry (note the pinky ring), but it's too impressive to leave out. Members of the 149th Pennsylvania Infantry, from the Ken Turner collection, here.
There were some surprises nestled in the Weaver report as well. I expected to see a few "housewives," soldier's sewing kits, among the listing. I suspect this is what Weaver meant when he listed a "needle case" (two other soldiers carried a pin cushion, and one carried thread). None of Weaver's soldiers carried any sort of games, such as cards. Another conundrum: What was a "book made from wood?" Perhaps a soldier's carving, like this one?

There are also the many items that only a single soldier carried (not listed in the above table). Some of these seem commonplace and others strange. An unknown soldier had a V.M.M. belt plate (perhaps a member of the Volunteer Maine Militia like this Maine soldier?). Other unique items included a small bag, three buttons with hooks (probably like these), a small candle stick (here's the patent for a popular type), a razor and brush, two bones (the instrument?), a knit cap (perhaps like this one worn by a member of a burial detail at Cold Harbor in 1865) one a "piece plaid blanket--colors white, blue and green" (here's a plainer, Army-issue blanket fragment found at Gettysburg), a salve box (perhaps an ointment pot like this one?), four slides (not sure about those), a gimlet (a boring tool like this), a fish hook, a stencil plate (popular among soldiers for marking their equipment), an artificial tooth with gold plate, and a "tassel" and "smoker" (perhaps a smoking cap like this one?).

This material culture is fascinating, and it reveals much about the everyday life of Civil War soldiers, but the sobering fact beneath it all is that these men died. While they lived, they carried mementoes of home and tools of their service, relics of this life and hopes for the next. These 275 young men, many never identified, fought and died for the Union. It's fitting, I think, to end this brief study of their worldly goods with the same poignant description Samuel Weaver chose to end his report:
Sergeant L. H. Lee, two combs, diary, and bullet that killed him.
Posted by Tyler Putman at 7:44 PM