As summer wraps up, so does my full-time involvement with the First Oval Office Project. As regular readers of this blog might have noticed, my title for this series, "Making Washington's Tent," turned out to be a little ambitious. Because of a combination of factors not unlike those experienced by the tentmakers of the 1770s, we struggled to acquire the proper material for the project. Although the English-woven linen arrived a couple weeks ago, it will take some further bleaching and finishing before it's ready for use. In the mean time, we began sewing a marquee from hemp canvas. Hemp and linen, both "bast" (inner plant bark) fibers, are often indistinguishable both in fabric form and microscopically.

The hemp we have has two problems, however: its salvage and its width. Because it is woven on a rapier loom (a twentieth-century innovation in which individual weft yarns are carried across the warp yarns and remain detached along the edges, rather than being carried back and woven into the opposite direction as in a shuttle-based loom), our hemp has a fringe-like, modern edge. The maker's of Washington's 1777 marquee employed and felled (sewed flat) the clean, shuttle-woven salvages in visible places, and used full widths of fabric wherever possible. Why cut fabric, they knew, when you could avoid waste and make felling seams simpler by using the full width? We have to cut the wide hemp down so it matches the original widths and trim the salvage anachronistic salvage. As a result, our seams will be fully enclosed and flat felled, whereas the original seams feature overlapping, flat salvages (not rolled under), resulting in a minor but not insignificant variation from Washington's and probably most other period tents.

While waiting for our canvas to arrive a couple weeks ago, we finished up the various hunting shirts we had in production, soon to be used by Colonial Williamsburg's military programs interpreters and as prototypes for the Costume Design Center, which produces most of the foundation's costumes. 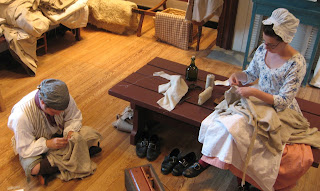 We also began a horseman's tent, the sort of tent used by American cavalryman and, most often, officers of various branches of service. Such tents looked like miniature houses and not unlike Washington's inner chamber, and included low walls and gabled ends. Using John U. Rees's article, "'We... got ourselves cleverly settled for the night...': Soldiers' Shelter on Campaign During the War for Independence" and the sources he cites as a basis, we plotted out a tent approximately 9' by 10' in footprint and 7' tall. Quartermaster General Timothy Pickering complained in 1781 that "Many (I believe most) of the walls of the new wall & horseman's tents, & even some of the Marque's have been made of one breath of Cloth running all round: but this is much disapproved of: they never look well when pitched nor are they so strong as when the length of the Cloth is up & down — the numerous seams gives strength to the tent."* In order to replicate this obviously common practice (rather than Pickering's instructions), we decided to make our walls out of one long length of fabric. Because we were employing a narrow material, this resulted in shorter walls than the 3' desired by American quartermasters like Pickering. 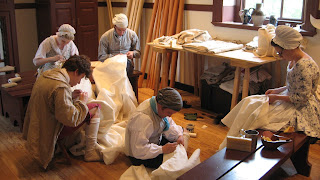 The crew sewing the horseman's tent. 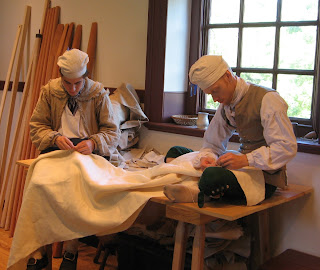 Aaron Walker and Joseph Privott at work on a section of the horseman's tent.

Although we moved on to the marquee before finishing our horseman's tent, we made good progress, and it will eventually join our four common tents as representatives of Williamsburg's tentmakers' trade. Of course, most sewing stopped for a couple days as we turned to cutting out the marquee, much of which work involved cutting the fabric to strips of the appropriate width. 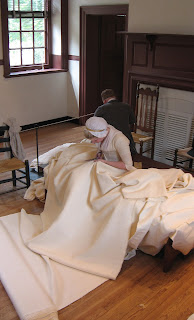 As the room filled with canvas, stitching began in earnest. We had to be strategic about which seams to attack first, lest we end up with unwieldy sections too early in the process. 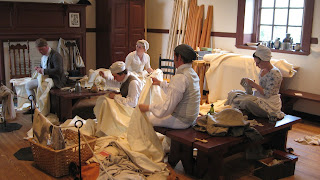 Sewing the marquee in the Secretary's Office/tent shop. 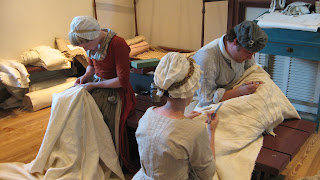 Nicole Rudolph, Gwendolyn Basala, and Michael Ramsey at work on the marquee. You can see the points of the triangles that form one of the bell ends of the roof in Michael's hands.

By last Saturday, the official final day of the summer incarnation of the First Oval Office Project, we had completed the center roof section, one bell end, and part of the other bell end. 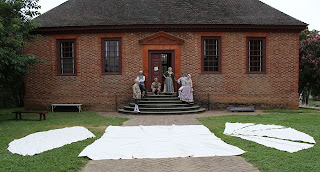 In order to complete the marquee in time for a variety of events this fall, some of our crew will stay on, working in the Secretary's Office in September and October. You can follow their progress, as I will certainly be, via the facebook page, and I'll be posting periodically about some other interesting results of our summer work. In the mean time, I'll leave you with a couple images of our sum product: one marquee inner chamber, four common tents, twenty hunting shirts, thirty-five knapsacks, 125 wooden tent pins, sundry work caps and poke sacks, a handful of other garments including trousers, overalls, and waistcoats, and (from other tradespeople) two leather portmanteau and various tent poles. Not to mention the thousands of visitors we talked with about George Washington's life under canvas, the Museum of the American Revolution, the Secretary's Office, and the work of making tents in Revolutionary America. Not bad for a summer's work. 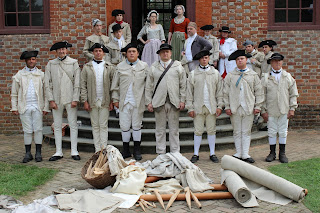 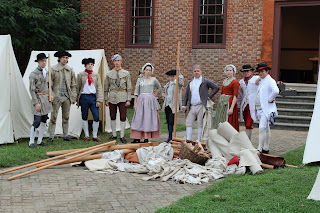 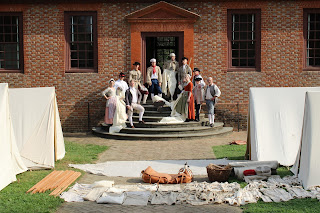