Readers of this blog may have noticed my affinity for buttons, as demonstrated in past blog posts such as this one and this one. It's been a great summer for Revolutionary War military buttons here in Virginia and elsewhere.

At Colonial Williamsburg, archaeologists working on the Anderson Armoury complex this spring came across a nice French button from the 53rd Regiment, which served as artillery during the war.

A button from the French 53rd Regiment, from here.

More recently and almost as close by, a student in the Watermen's Museum Archaeology Camp (Yorktown, VA) found a button from the French 85th Saintonge Regiment Infantrie washed out of a hill near the battlefield. You can read more here, including about the museum's plans to present the student with a resin cast copy of the button and donate the original to the Park Service, which maintains the battlefield. Thanks to Nicole for bringing this one to my attention. 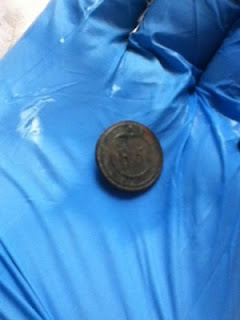 Button of the 85th Saintonge Regiment Infantrie found at Yorktown, from here.

Up in New York, the folks at Chrysalis Archaeology, a cultural resources firm, recently uncovered several Revolutionary War buttons in their excavations near the South Street Seaport. You can read more about the buttons here. Thanks to Joseph Privott for bringing these to my attention.

British military buttons recovered by Chrysalis Archaeology in New York City, from here. I'm away from my library and unsure which unit wore the "J 5" button at left.

Meanwhile, the First Oval Office project continues, and I'll be posting more about our progress in a few days. Check us out on facebook or via the webcam in the mean time!
Posted by Tyler Putman at 8:34 PM