What drew me to Obadiah Mead’s jacket was an image of it that appeared in a New York Times article about an exhibition at the Greenwich Historical Society. I’ve been studying common men’s clothing from the 18th and 19th centuries for years, even though very few actual garments survive (most were used up and thrown out). When I saw the article, I could tell even from the small photo that Mead’s jacket was right up my alley. Jackets were common working garments but people rarely preserved them for posterity. And striped linen was common in working clothing while unusual in finer men’s garments. In these qualities, Mead’s jacket echoes what you see in some visual sources and a handful of surviving objects, like the jacket supposedly worn in 1778 by Revolutionary War soldier Colonel Joseph Noyes. 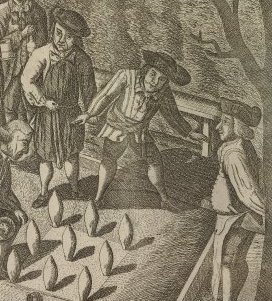 Detail of "Saint Monday in the Afternoon," (etching, 1770s), from the British Museum 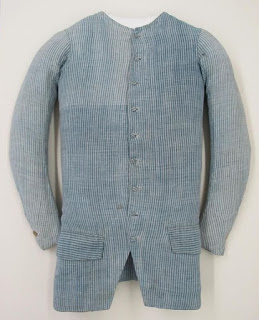 But you'll notice that Mead's jacket looks a little different than these. Most importantly, it stops at the waist in a "straight-cut" style, without the skirts (what we might call tails) or other garments, including the two above. People used a lot of terms for garments like Mead’s in the eighteenth century: jacket, waistcoat with sleeves, and so on. “Roundabout” and “monkey jacket” appeared slightly later as terms for similar jackets, in the 1790s and 1810s, respectively. As an outer garment and without skirts extending below the waist, I consider Mead’s garment a jacket. But that doesn’t mean that someone wouldn’t have called it a waistcoat with sleeves in the 18th century (and that same person might have called Noyes's waistcoat with sleeves a jacket). Look out for a forthcoming article I’ve coauthored with Matthew Brenckle on working men’s jackets that discusses other examples of these garments that survive around the world.

And so, I found myself on the day after the 2016 election, in the midst of a pre-planned research trip, doing nothing more civically engaged than counting stitches in a ragged, 240-year old jacket. It seemed rather ridiculous at the time (maybe it still does), but Mead’s jacket is nonetheless a fascinating object. Like Mead’s personal history, the jacket itself continues to foil me. I can’t make firm conclusions about parts of it, but I thought I’d share a few images and some commentary here before getting to the most interesting part of the garment: the remnants of its belt.

Mead’s jacket matches what we know about garments of the 1770s. It is hand-sewn, pieced for economy’s sake, and made from at least two different striped linens.

The jacket had twelve buttons down its front, though non survive. It is entirely unlined, though it has an extra layer, called a facing, to reinforce the buttons and buttonholes. 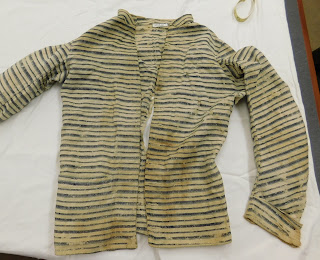 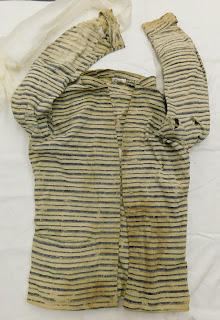 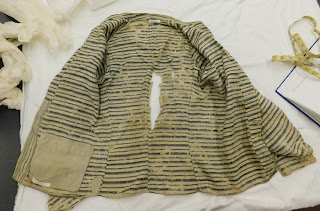 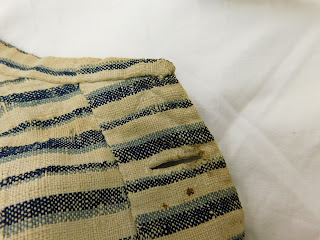 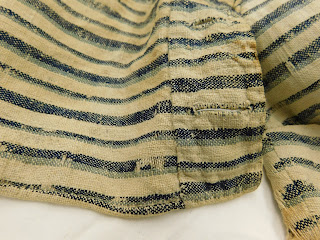 The jacket has sleeves with several patches (one probably original, as it matches a piece of striped linen on the inner facing, and another that I think may be a later attempt to patch the lower sleeve) and cuffs that fold up. 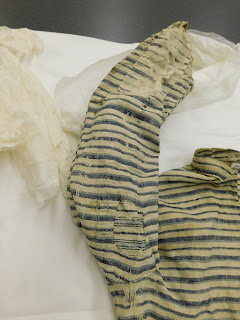 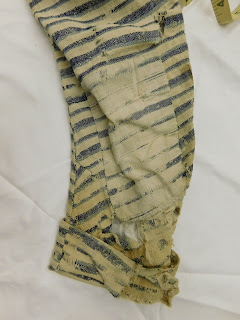 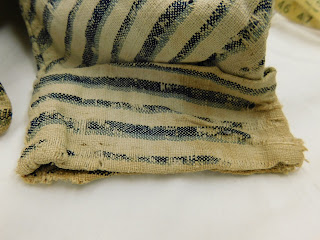 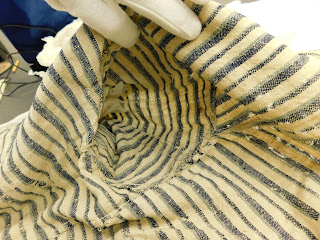 The jacket’s collar is “false,” meaning it’s a sewn strip of fabric (or, rather, several small pieces sewn together to form a strip) that’s sewn right onto the jacket body. Collars like this gestured towards fashionable styles (functional, separate collars) but also reinforced the neckline, which would be worn out faster than other parts of the jacket. 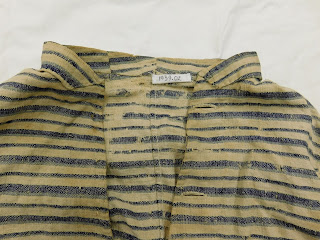 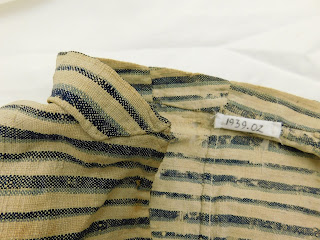 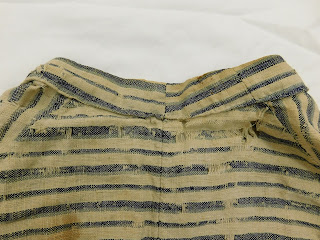 The jacket has only one pocket, constructed as a “welt” on the lower right side. I’ve seen evidence for jackets made with only one functional pocket, but usually they have two welts to give the illusion of symmetry. 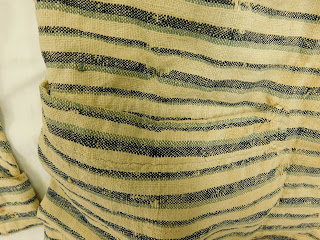 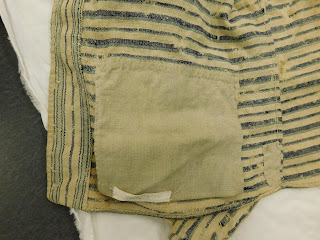 By far the most interesting part of the jacket – and perhaps its most significant contribution to our understanding of the material culture of this period – is the remnant of a waist belt. You can see the two signs in these images: a reinforcement patch and two button scars (attachment points) on the right-hand side seam next to the pocket bag and the barest remnant of a sewn-down end on the left-hand side. 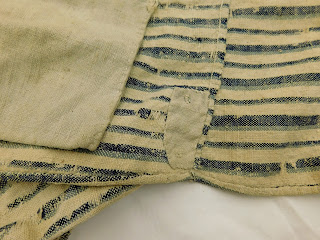 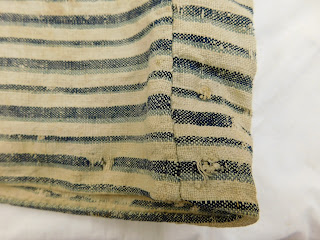 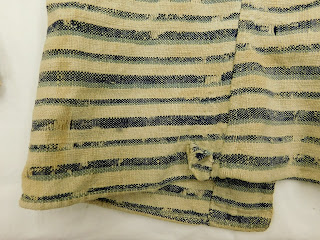 It’s quite possible you’ve never heard of belted waistcoats. But for the handful of people in the world who care about this stuff, this is pretty significant. There is no other known example of a man's belted waistcoat or jacket that still exists. Portraits of the 1770s and 1780s show military men and even the occasional civilian wearing these peculiar waistcoats, usually “straight cut” – without skirts (tails) – that feature separate fabric belts (belts also appear in documentary descriptions of garments and on at least one woman's riding habit waistcoat). Here are a few examples (1): 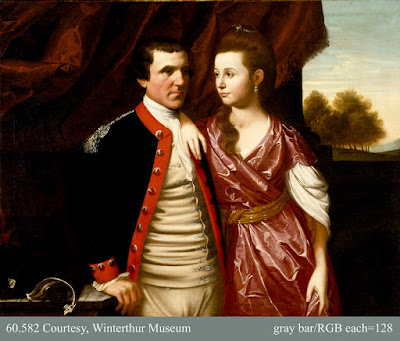 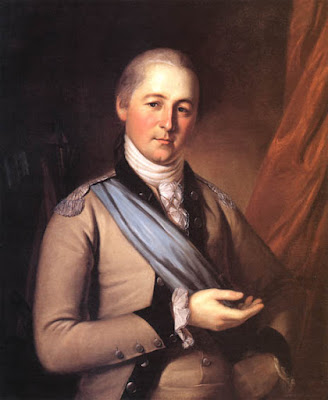 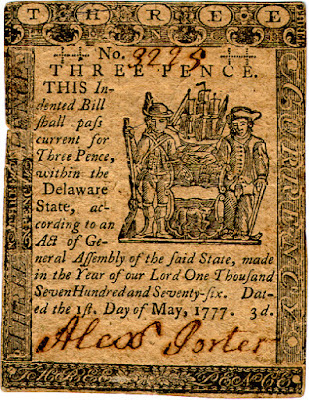 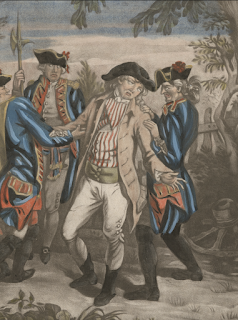 Detail, "The German Recruiting Serjeant," (engraving, 1775), from Brown University Library (thanks to Matthew Skic for bringing this to my attention!) 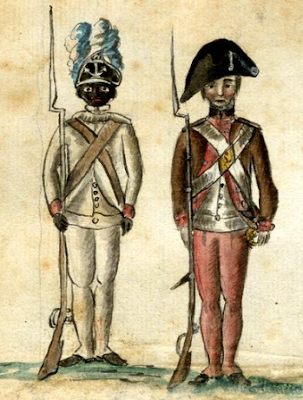 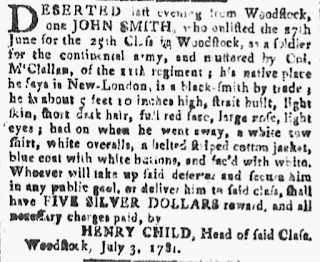 An example of a runaway ad mentioning a "belted striped cotton jacket," from the Connecticut Gazette and the Universal Intelligencer (New London), Jul 27, 1781


And thanks to the scholarship of and research of Neal Hurst, Philip Katcher (2), James L. Kochan (3), and Matthew Skic, we know a quite a bit about the documentary history of these garments. They’ve traced many references to belted waistcoats in military orders, deserter descriptions, and artwork. One longstanding mystery has been how these belts were attached. Perhaps as a separate piece tied behind (as one period document suggests) or buttoned on both ends to the side seams, as suggested by the belt studied by Matthew Skic? Perhaps sewn down on one side, wrapped across the front, and buttoned on the other? The Mead jacket gives us our first glimpse at the latter style, with the remnants of a narrow belt sewn down on the left and two closely spaced buttons to secure it on the right side.

The other mystery of belted waistcoats is – quite frankly – WTF is the point of a belt anyway? All of the explanations have counterarguments.

Perhaps it's a form of truss to support the abdomen of soldiers? Then why would elite officers under less strain wear them as well? Were they just matching the fashion of soldiers in general?

Perhaps it allows a straight-cut waistcoat (which would have required less fabric than a regular one and would be more economical for clothing many soldiers) but also spans the potential gap between the bottom of the waistcoat and the top of the breeches. But then why not just make the waistcoat longer in the first place?

Perhaps it is to tighten the waist of the garment, cinching it in. Then why not cut the waistcoat differently in the first place (no other men’s garments in this period are cinched in this way)? It would have made a garment bunch oddly to be done this way.

Unfortunately, without its complete belt, the Mead jacket only offers us tentative answers. It could be a sort of truss, but the belt was so narrow as to offer relatively little abdominal support. Similarly, because it is so narrow, the belt doesn’t seem to have extended below the waistline of the jacket, so it wouldn’t have covered any gaps. And the cut of the jacket doesn’t suggest that the belt would have been needed to cinch it in.

My final conclusion is that the Mead jacket (and other belted waistcoats) had a belt for one major reason we haven’t really discussed: fashion. Apparently people thought belts on waistcoats and jackets looked good, including ones like Mead’s that might have done absolutely nothing functional.

And the vagaries of fashion, after all, are still why we wear a lot of the strange things we do. We may not know how exactly Obadiah Mead died or why he was wearing a rather unusual jacket, but we do know that, in his time, he had some fashion sense.

Update: Listen to Neal Hurst, Matt Skic, and me talk about waistcoats with belts in this video from April 13, 2020.

(1) Two other examples, not shown here, are the portraits of Major General Jabez Huntington, by John Trumbull, at the Connecticut State Library, and of Lieutenant John Harleston, Jr., by Charles Willson Peale, at the Art Institute of Chicago.