In 2016, I had the chance to examine a remarkable garment in the collection of the Greenwich (Connecticut) Historical Society. This striped linen jacket survives with a provenance that it was worn by a man named Obadiah Mead on the day he was killed by British soldiers who raided Greenwich during the Revolutionary War. 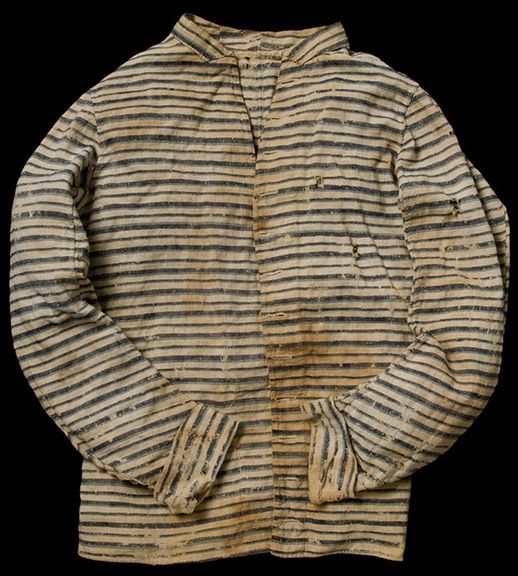 I'll get into the construction and other details of the garment itself in Part Two of this post, but first let's discuss the jacket's provenance and what we actually know about Obadiah Mead. Despite being from a relatively prominent family of the time, he's an elusive figure. Like many early Americans, especially those who died young, he left very little documentation behind. He lived in Greenwich during the violence of the Revolutionary War, his jacket is in the fashion of the 1770s and features apparent bullet holes and bloodstains, and he was dead and gone by the time his father died in 1783. But if he was indeed killed by British or Loyalist raiders, there is no smoking gun besides the material evidence of his jacket. What do we know about the man who wore it?

Obadiah’s father, Benjamin Mead, Jr., was a prominent Greenwich resident and part of the expansive and old Connecticut Mead family. Born in 1729, Benjamin married Mary M. Reynolds in 1751 and together they had five children, including Obadiah in 1759 (1). Obadiah’s schooling began in May of 1769, according to his father’s account book (2). From the beginning of the Revolutionary War, Benjamin Mead supported the Revolutionary cause, helping to fund the erection of a cannon battery in Greenwich and the equipping and supply of local troops (3).

Obadiah, meanwhile, felt the same political leanings and served at least two stints in the state militia, including in Captain Mathew Mead’s Company of the Eleventh Regiment in August and September 1776 and between October 1776 and January 1777 under the same captain in the Ninth Regiment (4). He was still alive on May 2, 1779, when he delivered a load of provisions for troops to Horseneck, outside of Greenwich (5). By that time, he was apparently engaged to Charity Mead, a distant cousin, at a younger age than was common among Connecticut families (6).

It was a dangerous time to live in Greenwich. Residents called it a “frontier situation” between British and Revolutionary forces (7). In 1778, Benjamin Mead’s horses, cows, and oxen were stolen in two nighttime separate raids, presumably by a “Tory Party," (8) In October of 1779, John and Amos Mead wrote to the state Assembly to report the “frequent Incursions of the Enemy in to the said town, they have made great ravages upon the good Citizens there, in plundering many of their Houses, Burning some of their Buildings, Captivating many of the Inhabitants who have been long confined in their Goals, where several are to this time languishing under the mercyless hand of tyranny,” (9). Notably, however, they did not mention any deaths. Such incursions continued for the rest of the war. Benjamin Mead’s taxes were abated for several years during the war in compensation for his losses. He owned and lost more than most people in Greenwich; his abated taxes were among the highest in the town and a 1783 inspection noted that he had lost at least £100 worth of property since 1779 (10). And, at some point during the War, he lost his only son.

We still don’t know how. Although many of the Mead family’s papers survive, including Benjamin Jr.’s account book and personal papers, Connecticut state records, legal documents, and family correspondence, none of the ones I've discovered describe or even note Obadiah’s death (11). It is possible that such a record exists in another collection or archive, perhaps even in Great Britain, but I haven't found it.

In fact, the earliest direct description of Obadiah’s death appeared frustratingly late, in an 1895 newspaper article:

“…a raid was made upon this place. The son, Obadiah, hid himself in a neighbor's barn, standing just south of the southeast orchard. Some one of the Tory neighbors, knowing the fact, informed the red-coats who surrounded the barn, threatening to set fire to it and to smoke him out. To escape their clutches, he ran from the barn across the orchard to jump down the rocks to "Dyspepsia Lane." He was followed, however, by the soldiers. Obadiah, seeing the impossibility of escaping, surrendered. He was then at once shot, the ball passing through his left arm and entering his side, killing him instantly. The coat he wore, showing the bullet holes, which has been so carefully preserved all these years, was inspected by all the company present.” (12)

The story was largely repeated, sometimes with more dramatic flair, in later accounts of Mead’s death (13). An undated late nineteenth or early twentieth-century genealogical document in the Mead family papers at the Connecticut Historical Society includes quotation marks suggesting it was copied from another document and reads: “Obadiah Mead, son of Benjamin Mead departed this life the 26 day of June in the year 1780. In the contest between the United States and Great Britain, aged 21 years and one month" (14). The last account related to Obadiah in his father’s account book is in regards to settling an old debt on October 17, 1783 (15). Obadiah does not appear in his father’s will, likely prepared that same year (16). His burial site was forgotten by the time the story was recorded in the nineteenth century and there is no mention of his life or death in various state-wide archival catalogs maintained by the Connecticut State Library (17).

And so, all that remained of Obadiah Mead after a century was a peculiar linen jacket, torn and bloodied, preserved as a relic of one family’s Revolutionary sacrifice. What can that jacket tell us about the Revolutionary War? Find out in Part Two!

(6) Mead, History and Genealogy, 389. For a recent study of two men who grew up in Connecticut at the same time as Obadiah Mead, see Virginia DeJohn Anderson, The Martyr and the Traitor: Nathan Hale, Moses Dunbar, and the American Revolution (New York: Oxford University Press, 2017), including commentary on marriages, 23-31.

(12) “A History of the Hyde Branch Read by One of the Descendants,” Greenwich Graphic, October 26, 1895. A typographical error of a period in place of a comma after “however” has been silently corrected here.

(16) The copy of Mead’s will in the Connecticut State Library Archives is somewhat problematic because it is dated (on its exterior) 1786 and 1788, though he died in 1783 according to Spencer, History, 389. See Mead collection of Greenwich items including bonds, deeds and estate papers relating to the Mead family, 1755-1858, Connecticut State Library, Hartford.