A couple months ago, I took an unusual path out of work after dark and passed by an excavation pit in the middle of one of Old City Philadelphia’s original street blocks. I’m always curious about what such digging is turning up, but it took a while to figure out exactly where I was. Beginning in the 1680s, William Penn and other planners envisioned an city built on an orderly grid pattern. They mostly got it, especially when you compare Philadelphia’s street plan to those of other cities, like Boston, the developed more organically into spiderwebs instead of grids. But early in the Philadelphia's history people subdivided their property and cut alleyways in between the main streets. These alleys came and went over time, to the extent that whole websites and articles (like this one, this one, and this one) are now devoted to puzzling out their names and which ones still exist. My personal favorite is Little Boy's Court, purportedly the only street with extant 18th-century cobble- and pebblestone paving (and also adjoining the site where developers partially destroyed an 18th-century burying ground in 2017 before archaeologists began salvage operations and study of the human remains). 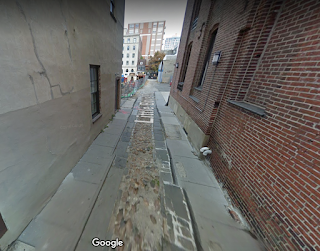 The excavation I came across is at the corner of today’s Bank Street and Elbow Lane, in the block bounded by Second and Third Streets and Chestnut and Market Streets. If Google is any guide, there hasn’t been a structure there for some time. But by the looks of it, someone is digging a new foundation for a building. That’s the sort of digging in Philadelphia that usually disturbs archaeological remains. But, as I’ve written elsewhere, there’s no legal mandate or practical apparatus to enforce archaeological excavations on private sites (unless a federal permit is required). That means that most such excavations destroy archaeological remains without any documentation. 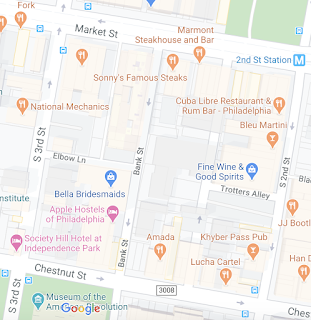 A Google map of the block in question. The lot is the blank gray rectangle above Bella Bridesmaids

I was particularly excited – or, perhaps, disheartened – to see a distinctive standing column of bricks on one edge of the excavation. Because it was empty, I knew it was a well shaft rather than a privy (privies – used as toilets – were gradually filled and remain so when uncovered today). Unfortunately, but the time I returned to photograph it in daylight two days later, it had already been removed by excavators. You could see a few artifacts scattered around the pit: mostly 20th-century bottles. But thanks to Matt Dunphy, I did secure a few images of the well and another view of the site before its destruction. 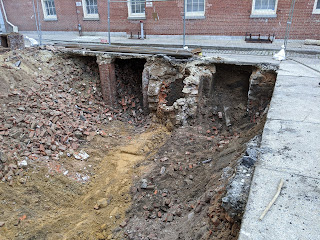 A view of the well against Elbow Lane. This view was taken facing south, standing on the narrow alley now called Bodine Street 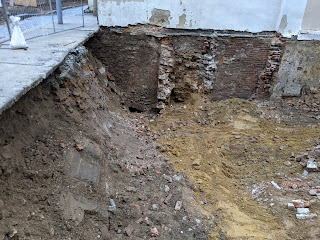 Looking north from Elbow Lane (Bodine Street is on the left), you can also see a brick archway near the bottom of the excavation. This shot was taken standing almost directly above the well

I got curious about this lot’s history and the well’s potential origins. In the eighteenth century, the southern end of Bank Street was called White Horse Alley, and Elbow Lane was a more literal elbow: coming down from High (now Market) Street and making a ninety-degree westward turn in the middle of the block. Without going into too much detail (or, frankly, too much research on my part), it’s interesting to find a few traces of the lot in digitized sources and to speculate on who might have used the well.

Despite their apparent orderliness, it’s notoriously hard to puzzle out the history of Philadelphia houses for a couple reasons. Most importantly, addresses have changed, most notably when they were renumbered around 1856. This latter change involved the implementation of the "Philadelphia System," now common in many other places, in which each block of a given street is assigned to a set of 100 numbers. In other words, for example, houses stand in the 600 block. When you cross a major street, the next house numbers begin at 700 and 701, on either side.

Scharf and Westcott’s famous 1884 History of Philadelphia noted that there was a brewery on the corner of Elbow Lane and White Horse Alley as early as 1737. George Gray (namesake of gray’s ferry) operated the brewey beginning in 1752, and his widow Mary kept up the business after his death.

I think that the brewery must have been on the southwest corner of the intersection, and that the structure on the lot I saw under excavation was the three-story brick house listed as being on the northwest corner in this 1791 advertisement: 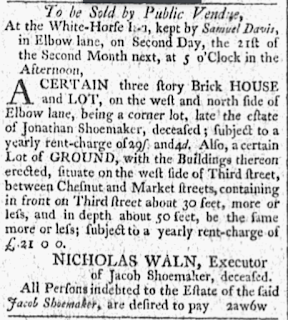 Shoemaker had been in the house since at least 1774, when he took out an insurance policy for the house from the Philadelphia Contributionship (whose digital archives are one of the great and overlooked gems of Philadelphia's historical sources). It was an impressive place for the alley. At the time, it was 14 ½ feet wide and 28 feet deep and included two rooms on its first and second floors, plastered walls, stairs, and a plastered garret (its third story). Behind the house stood a 10 foot by 10 foot one-story kitchen. Either the kitchen or, perhaps, the kitchen and the whole house were 7 years old in 1774. 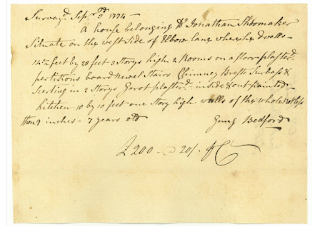 The only city directories published before Shoemaker’s death list an address for him on Second Street, and it’s hard for me to tell exactly which number was assigned to the Elbow Lane lot. That makes it difficult to determine who bought Shoemaker’s house in 1791 (though it would be rather easy with an in-person title search, I imagine). The 1795 city directory was the first to be organized by lot (rather than alphabetically), so it gives us a glimpse of the residents of Elbow Lane at the time: 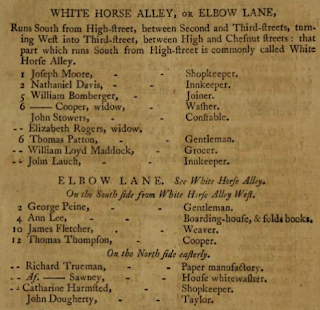 From The Prospect of Philadelphia (1795)

Though I only viewed them from the street above and in these images, the bricks and the well itself on the Elbow Lane edge of the lot looked, to me, to date from some time in the 19th century rather than to the earlier periods of occupation noted above. Perhaps it was even meant to offer water to others besides the residents of the building, given its proximity to the street itself.

Unfortunately, other than the images and cursory research here, there’s no longer a trace of this well or the other archaeological remains of the lot. Maybe someday I’ll do a bit more archival digging and see if I can come up with the later history of this lot. For now, we’ll leave the scene in 1791. And not for nothing, but that’s just in time to avoid one of Philadelphia’s first epidemics, the yellow fever outbreak of 1793. Sometimes it’s hard to escape the present, even in the past.
Posted by Tyler Putman at 2:40 PM