A Pipe Kiln Waster and Imperfection

I've long been attracted to antique ceramics that exhibit accidental signs of their production. Aesthetic flaws that might take away from decorative value are what draw me to old pottery. As Nicole can testify, I pick up and flip over old stoneware crocks at the antique shops we visit to look for these things. I love misshapen crocks, pieces of other pottery adhered to finished ones, scars from the small clay "furniture" used to stack things in a kiln, and "turkey droppings" of excess glaze. Sometimes you can detect the streaks and impressions of the potter's hands and even individual fingerprints. Old bricks occasional feature animal footprints from creatures that got into a brickyard as things were drying. Dramatic kiln failures, unsuitable for sale, were called "wasters," and discarded at the kiln sites themselves. 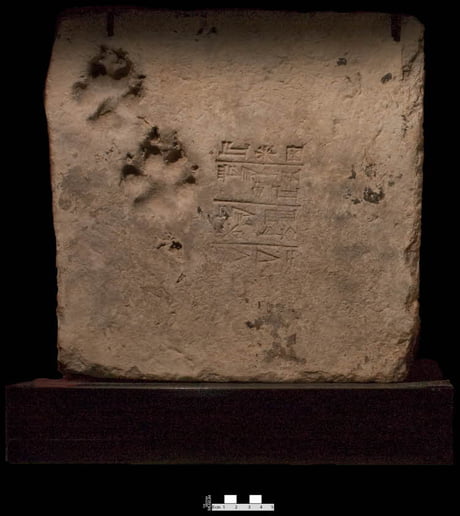 Examples of turkey droppings, a potter's fingerprint, a 16th-century Dutch kiln waster, and a 4000-year-old tile with a cat footprint from Ruby Lane, Ebay, the V&A, and here.

What could be more interesting than these little material signatures of some past failure? I far prefer flawed objects to perfect ones. And sometimes it's not accidental. Navajo rug weavers deliberately introduce flaws into their work. Japanese culture values wabi-sabi, an acceptance of natural imperfection. That sort of acceptance is not a strength of "Western" cultures, even if many people believe that perfection is best left to God. 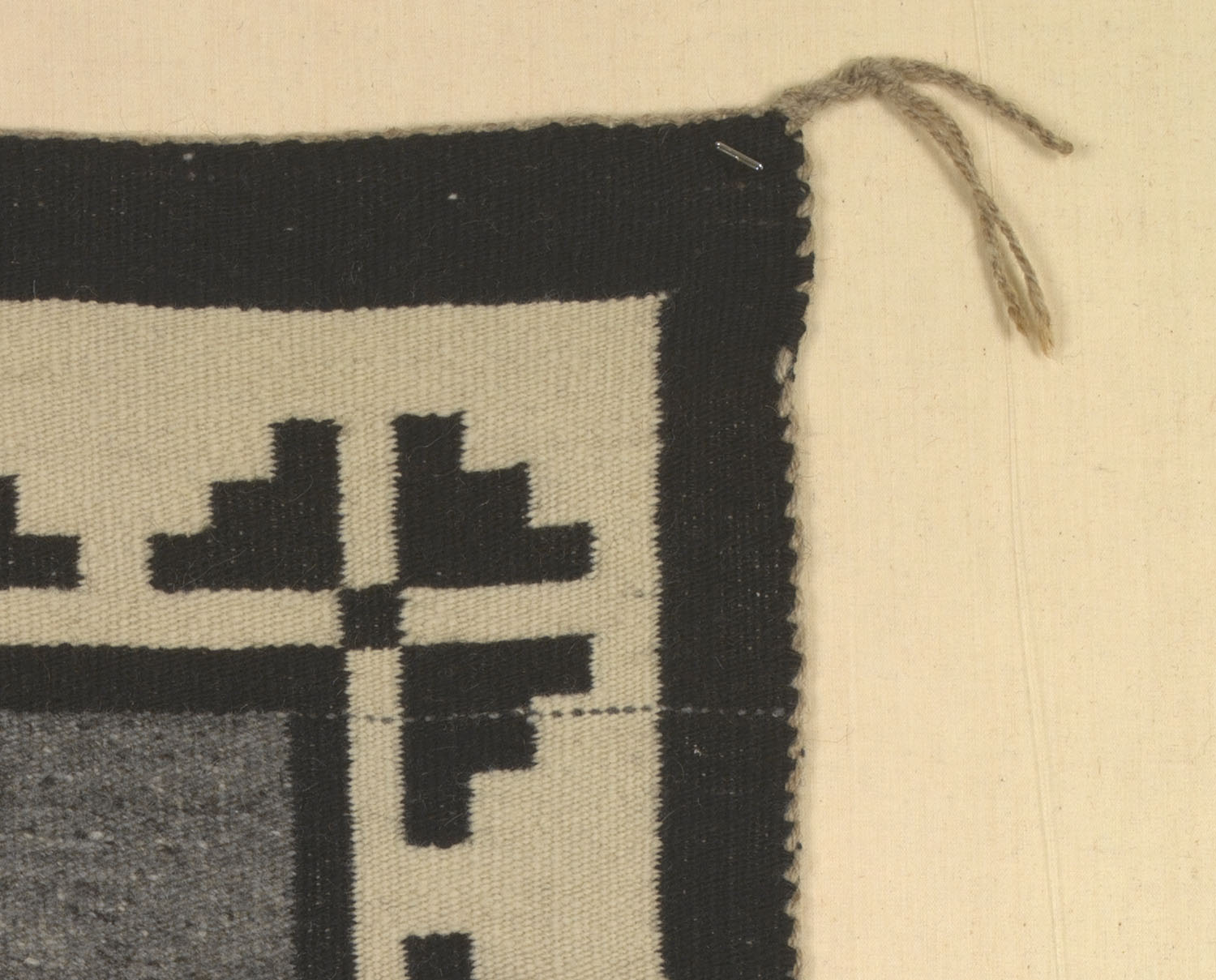 A "spiritline" in a Navajo rug that Western eyes might read as an unacceptable imperfection. From the Smithsonian Museum of American History, here.

My most moving experience during a recent class I took on historic window restoration was when the craftsman leading the workshop was examining a century-old plate glass window and detected, in the awkward streak of glass on top of the pane's surface, evidence of an accident during production. "This is an amazing piece of glass," he said, staring into the pane, "See that streak, that odd blob? Someone messed up. That's someone in the shop tripping and accidentally throwing a bit of glass onto this finished pane." You could almost hear the echoes of a glassblower cursing his clumsiness across a century of time.

Since seeing it on my colleague Brenda Hornsby Heindl's blog in 2013, I've also coveted a particularly sculptural failure she acquired, a fused waster of mid-nineteenth century pipe heads uncovered on a kiln site in Ohio. This accident could hardly be more artistic, to my eye, if someone had tried to create it on purpose. 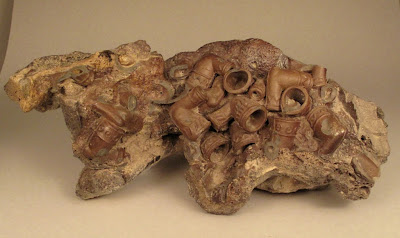 I was in Gettysburg this past weekend when, in one of the town's innumerable relic shops, I came across a small example of a similar accident, this one from the 1860s kiln of John Taber of Wolfeboro, New Hampshire. Taber was a prolific potter who produced distinctive redware clay pipe heads (smoked by inserting a reed stem into a socket next to the bowl) which have been found on archaeological sites across the country. In the late twentieth century, it seems that someone (not an archaeologist) dug Taber's kiln site. Many of the recovered pipe heads have subsequently made it onto the antiques market. The dealer I visited had a number of intact pipe heads, but what caught my eye was a waster: two heads that had collapsed and fused together. 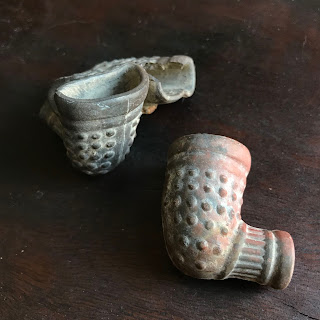 Normally I don't buy "dug" materials. You can find plenty of things in antique shops that have been excavated by people for fun from battlefields, privy pits, and homestead sites. Without any written documents or records, and with none of the attention to detail that professional archaeologists deploy to capture information about the past through the buried records, these individuals effectively loot our collective heritage for fun and profit. Purchasing dug items encourages the ongoing excavation of similar things. 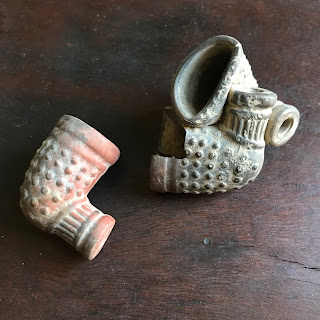 In this case, however, I couldn't resist an ethical compromise. It's unfortunate that whoever dug Taber's kiln site doesn't seem to have left any record of what they found. But in this small artifact, we can see the shadow of an accident that happened 150 years ago. It reminds me that things rarely end up as we intend. It reminds us to look for the beauty in the imperfect. No good for smoking - no good for most anything in 1865 - this bit of trash, it turns out, is quite good for thinking.
Posted by Tyler Putman at 1:25 PM