This could be a long blog post. I have a lot of things to say about the surprise discovery of the remains of the historic burial ground of the First Baptist Church of Philadelphia, uncovered during a construction project on Arch Street last fall. As an archaeological site, the burial ground was partially destroyed by construction equipment operating there. It was only through the intervention of some dedicated (volunteer) archaeologists that any real archaeology was completed at all, and that work was speedy and only a few steps ahead of the backhoes. I could easily lament the rather shameful disengagement of various local and state agencies who claimed they lacked jurisdiction over human remains and/or the site.

And we could certainly discuss the lack of any real enforcement mechanism for the cultural heritage guidelines Philadelphia and Pennsylvania have on the books. I have strong feelings about how a city that prides itself on its cultural heritage simultaneously ignores the rampant destruction of archaeological resources on private land (often despite the laudable advocacy of organizations such as the Philadelphia Archaeological Forum). In 2014, for example, a site at the corner of Third and Market that included a number of eighteenth-century foundations, privies, and wells was destroyed and looted by private collectors. All legal. All to the great detriment of each of us, because each of us owns the legacy of the people, many anonymous, enslaved, and forgotten, whose only traces are things like broken bits of pottery thrown down a well and the human bones that lie buried under our feet. These are artifacts that can tell profound stories about our ancestors. 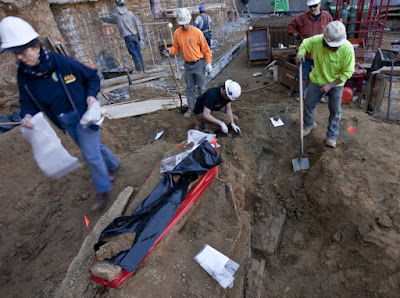 Photo by Evi Numen, from hyperallergic.com

But I want to get right to the point. Now that the eighteenth-century human remains found on Arch Street - over seventy individuals and many more fragmentary bits - are above ground, they are in urgent need of proper storage, conservation, and analysis. However you feel about the conditions of their recovery, we can probably all agree that the least we can do for the people who were buried on Arch Street - and for ourselves, because of all the things we can learn about our predecessors from studying their bones - is restore some sense of individuality and humanity to their remains. Thanks to the dedication of a few key volunteers, the Mütter Museum, the College of Physicians of Philadelphia, and other institutions, this work has begun. It needs your support.

Take a minute to consider the Arch Street Bones Project, the crowdsourced funding campaign to support the urgent needs of this collection. You might be surprised at how much we will learn about the past.