Once you have spun and hanked (wound into coils) your flax yarns, wrote John Wily in 1765, they should be "boiled in Water and Ashes, to make it soft and pliable, that it may weave the closer and tighter together" (49).

Wily was frustratingly vague here, but other sources help flesh out his meaning. Samuel Johnson, in his 1755 Dictionary, defined "buck" as laundry, laundry water, and the act of laundering. So one could presumably buck your buck in buck. But more specifically, bucking was the first step in softening and bleaching flax for linen. A 1766 volume described in detail how flax yarns were bucked  by soaking them in water and treating them with lye (s.v. "Buck" and "Bleach"). One 1809 source even suggested boiling flax in seawater, unslaked lime, and potash before spinning it (265-266).

In 1765, a "lye" (a derivative of "alkali") was a very basic (versus acidic) solution. The most common household lye was rendered from potash. In short, water was passed through wood ashes (ashes in a pot) and a filtering medium. People used what trickled out for a variety of purposes, especially soap. Or, in the case of some farmers, softening and bleaching flax.

But, unlike other sources, Wily doesn't say to use lye or potash. He just says ashes. So, I experimented with these instructions alone. As far as ratios go, I decided to go with a source from 1769. Granted, it's talking about the treatment of grain to avoid fungal infections. But it's the closest I've found to an actual ratio: "Make some lye, such as is used for linen, in a bucking-tub, putting four pounds of water to every pound of ashes," (s.v. "Burnt-grain"). But instead of steeping the ashes in water to make lye, as these instructions suggest, I simply used the 4:1 weight ratio as the basis for otherwise following Wily's instructions.

That is, after I imposed on a friend to collect a bag of ashes from his wood stove (the handoff of this bag, of course, generated a number of tasteless jokes about drug deals and grandmother's ashes).

Vague again, you Wily bastard (see what I did there?). More experimenting was in order.

After doing a small test to make sure that my linen wouldn't simply disintegrate, Nicole helped me dutifully measure out the appropriate amounts of water and ashes. 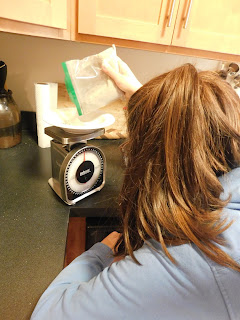 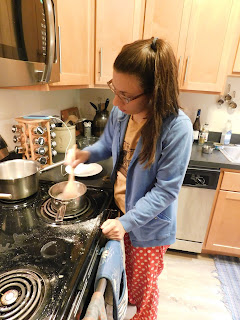 We prepared four small hanks: a control, one boiled for five minutes, one for ten, and one for twenty.

The problem, we instantly realized, was that it was impossible to see anything in the ashy water. I had assumed Wily meant you would be watching your flax while it was submerged, but clearly he wanted you to fish it out periodically to examine it. But even when we fished the linen out, it was hopelessly dingy and clotted with small bits of charcoal, making it impossible to see any linting. So we went with the timer method, even if it's anachronistic. This was an experiment, after all.

I was skeptical whether the ash had many any difference when we first removed the flax hanks from the water. But lo and behold, after I washed them clean and let them dry overnight, they did indeed show stark changes. 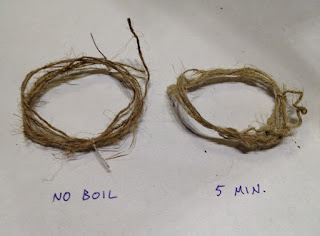 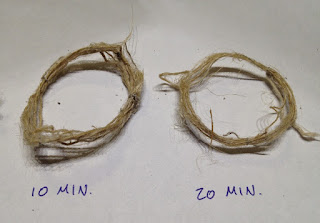 Each of our three tests showed that increasing the boiling time both softened the flax and significantly lightened its color. Wily never mentioned color changes, but that helps explain why bucking was a first step in bleaching flax to a pure white color.

I wish I had prepared a few more miniature hanks and really let them cook. I suspect a half hour would be about ideal under my stovetop conditions, but who knows what an hour or two would do? At some point, of course, the flax threads would begin to break down and the hanks would disintegrate, but I suspect that would take quite some time. People boiled linen textiles when they laundered them, after all, and they didn't disintegrate.

With my bucking experiment over, there is only one final step in this long saga of my journey from flax to linen: weaving. And that's a story for another day.


Thanks to Joseph Privott and Mark Hutter for their insights on bucking, Matt Mickletz for his ashes, and Nicole Belolan for her able assistance in all things.

A Society of Gentlemen, Members of the Society for the Encouragement of the Arts, Manufactures, and Commerce, The Complete Farmer... (London: R. Baldwin et al., 1769).
Posted by Tyler Putman at 11:27 AM