Part One: A Survey of Extant American Revolutionary Regimental Coats

This two-part post documents the basic details of 31 known eighteenth-century American military regimental coats. Though it is focused on coats used during the Revolutionary War (1775-1783), it also includes 17 uniform coats from the period immediately following the war because of their potential to provide useful contextual evidence both now and in future study and to help avoid future citations of these garments as true Revolutionary War uniforms. This survey does not include coats made and worn in the late 1790s or those worn by French, Hessian, or British regular army officers and men, in order to focus on coats known to have been both made and worn in American (including Canadian) contexts. Nor does it include various other upper body garments worn by Revolutionary soldiers, such as hunting shirts (see the work of Neal Hurst) and civilian coats and jackets worn into battle or violent situations (see, for example, posts about the Obadia Mead jacket on this blog).

These posts are a starting point for conversations rather than a comprehensive survey. Most of the details discussed here were gleaned from photographs and catalog records rather than personal study, which would allow for expanded conclusions and connections. The author would welcome correspondence with anyone who knows more about the coats documented here or other examples.

Several of the entries benefitted from a systematic survey of museum collections conducted by historian Norm Fuss, published in The Brigade Dispatch (August 2010 and Winter 2010). Thanks especially to Keith Minsinger (whose initial research inspired this survey), Henry Cooke, Neal Hurst, Michael McCarty, John U. Rees, and Matthew White for comments. 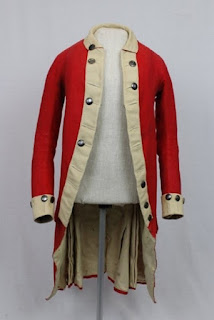 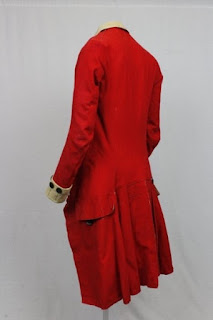 This coat, in the collection of Fort Ticonderoga (New York), belonged to Cyrus Baldwin, a Massachusetts soldier in the Boston Corps of Cadets between 1772 (when this uniform was established) and 1774 (when the company resigned in protest over the dismissal of their commander, John Hancock, by British General Thomas Gage). The coat is red with buff facings, with functional facings, cuffs, and cape. It has full skirts with a buff worsted wool lining visible in the turnbacks. It features domed silver buttons and a small buttoned tab matching the coat fabric on the left shoulder. Its details match the 1772-1774 timeframe which its provenance suggests. 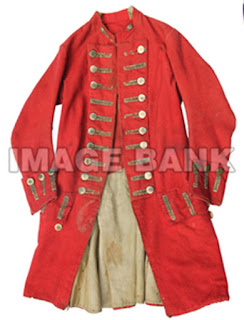 This coat, in the private collection of Don Troiani, is associated with Benjamin Holden, Lieutenant Colonel in Doolittle’s Minute Regiment of 1775 (absent at Bunker Hill; thanks to Tom Dietzel for alerting me to Swett's History of the Bunkle Hill Battle, which notes this). The coat appears to date to the 1760s with alterations from about 1774 or 1775. The coat is red with red functional lapels and cuffs. It has full skirts and functional pocket flaps with buttons set below. It has a small standing collar with tabs at the front and features gilt (metal over bone discs) buttons and metallic tape buttonholes on the lapels, cuffs, and pockets. The coat adheres to late 1760s-early 1770s fashion. 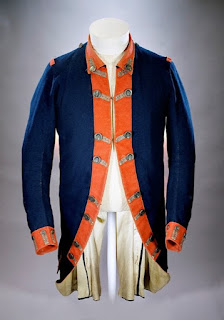 This coat, in the collection of the Smithsonian National Museum of American History, belonged to Peter Gansevoort and is supposedly the one he wore while Colonel of the 3rd New York Regiment and in command of the besieged Fort Stanwix/Schuyler in 1777. Born in New York, Gansevoort served in a variety of military capacities for the duration of the Revolutionary War and died in 1812. The coat is blue with red facings, cuffs, and cape and white turnbacks. It is unclear from available photographs whether the lapels and cuffs are functional. It features buttons set in pairs with metallic tape around the buttonholes. Silver-faced buttons, set in pairs down the lapels, feature a roped border and quatrefoil central design with no apparent military significance. The coat adheres to 1770s fashion. 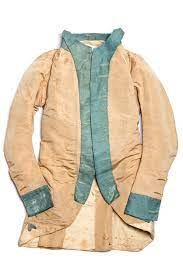 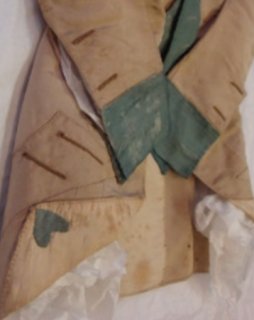 This coat, in the collection of the Charleston Museum, is associated with Thomas Pinckney, an officer in the 3rd Continental Dragoons. Born in Charleston in 1750, Pinckney had an active military career during the war until he was wounded at Camden in 1780. He served as a diplomat and congressman before his death in 1828. His regimental coat is rather unique, being made from red silk with blue silk facings (with bastion tops), small cape, and cuffs. The cuffs are round with a rear slit that would have originally been closed by three buttons, none of which remain anywhere on the coat (worked grommets indicate they intended to be removed, probably to facilitate cleaning. It is cut short in the style usually called a coatee, with small turnbacks from the front with blue hearts, behind which are set vertical false pocket flaps. Pinckney’s coat adheres to military fashion of the late 1770s. Notably, a 1790s diplomatic coat belonging to Pinckney (also of silk and in the Charleston Museum collection) is sometimes described as a military uniform. 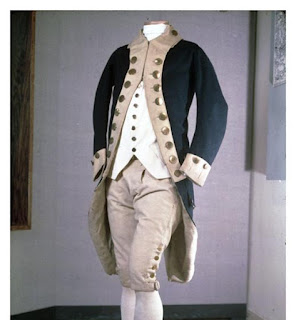 This coat, in the collection of the Maryland Historical Society, belonged to Lieutenant Colonel Tench Tilghman, an aide de camp and secretary to General George Washington for most of the war. Tilghman was born in 1744 in Maryland and died shortly after the war’s conclusion, in 1786. The coat is blue with buff facings with bastion tops currently buttons over the cape. It has plain round cuffs and long skirts with white turnbacks. It features large gilt buttons with a stamped, civilian floral border, set evenly on the facings behind sewn buttonholes. The fashion of this coat suggests that it dates to the latter part of the war, and it adheres to late 1770s/early 1780s fashion. 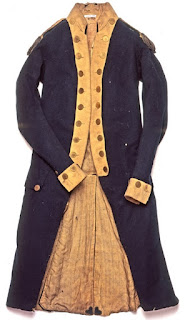 This coat was donated to the Bucks County Historical Society (Doylestown, Pennsylvania) by a descendant of Augustine Willett. The details of Willett’s life are somewhat obscure, but he seems to have served both during and after the war in the Pennsylvania militia. His coat stylistically post-dates the war, and is blue with buff facings with bastion tops, cuffs, and stand-and-fall collar. It features brass buttons set evenly behind the facings and cuffs behind worked buttonholes. It has full skirts and two metallic epaulettes as well as functional pockets. It adheres to late 1780s-early 1790s fashion.

This is the only known regimental coat that belonged to General George Washington, commander-in-chief of the Continental Army, and is in the collection of the Smithsonian National Museum of American History. Though sometimes described as his wartime uniform, it in fact dates to 1789. It is blue with buff facings, plain round cuffs, and a stand-and-fall butt collar. It features yellow metal buttons set evenly behind sewn buttonholes on the lapels (functional) and cuffs (nonfunctional); there is no buttonhole or button on the collar. The coat features long, full skirts with no evidence of turnback fixtures. Its fashion matches the historical provenance of 1789. 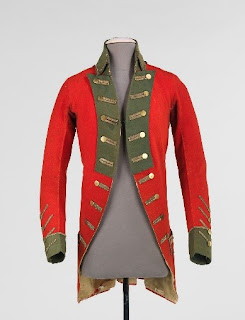 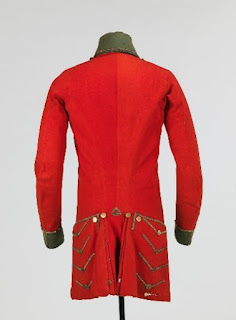 This coat, in the collection of the Metropolitan Museum of Art, is incorrectly catalogued as a Revolutionary War coat and is associated with Colonel William Taylor of Connecticut. The coat is red with green lapels extending only to the lower chest (with embroidered false buttonholes below), green cuffs, and a green stand-and-fall collar. There is no evidence of turnbacks and the skirts are relatively short. It features fold metallic embroidery throughout, including on the cuffs, arms, and skirts (including an interesting outline of a pocket flap), as well as yellow metal buttons. The narrow back panels and collar style date this coat to the years after the Revolutionary War. 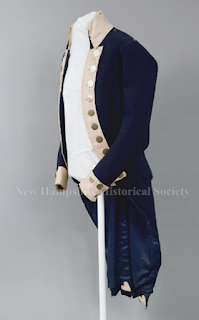 This coat, in the collection of the New Hampshire Historical Society, is associated with militia officer Benjamin Pierce of Hillsborough. Pierce (1757-1839), from Massachusetts served in the Revolutionary War before relocating to New Hampshire and serving in various militia roles and eventually as governor of the state. The coat is blue with buff lapels, plain round cuffs, and a stand-and-fall collar. The lapels are functional with sewn buttonholes and yellow metal buttons. Available images do not allow for more details about its skirts or pockets. Its collar style dates it to the years after the Revolutionary War, and certainly after its 1785 catalog date. 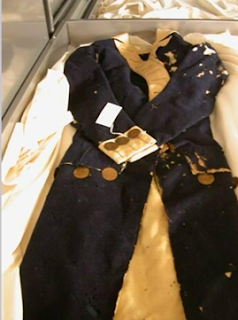 This coat, in the collection of the New-York Historical Society, is associated with Nicholas Fish (1758-1833) and catalogued as 1775-1785. It is blue with buff facings, cuffs, and collar and large yellow metal buttons, but the available photograph does not allow for further analysis. 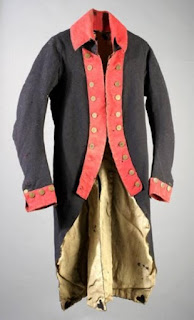 This coat, in the collection of the New-York Historical Society, was used as a prop by painter John Wards Dunsmore (1856-1945) and has a partially illegible inscription including “Houston” inside the left breast. It is blue will with red lapels, round cuffs with a rear slit, and stand-and-fall collar. It features plain yellow metal buttons backmarked “DOUBLE GILT.” The available photograph does not allow for further analysis of its skirts or pockets. Its collar dates to the years after the Revolutionary War. 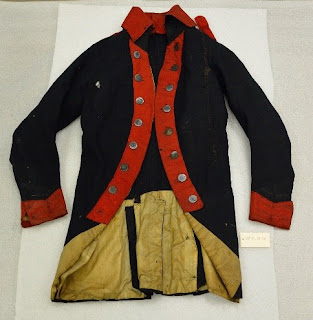 This coat, in the collection of the State Museum ofPennsylvania (Harrisburg) is associated with York County soldier Henry Felty. Though Felty served in the Revolutionary War, this coat post-dates that period slightly. According to Fuss‘s article, Felty was an officer of the Hanover Troop of Horse in 1798 and this uniform matches their regulations. It is blue with functional red lapels with sewn buttonholes, nonfunctional, chevron-shaped cuffs, and a stand-and-fall collar. It has white metal buttons and is cut relatively short with full white turnbacks. Details of its skirts and pockets are unclear.

A red wool coat with brown facings in the collection of the Daughters of the American Revolution Museum (Washington, D.C.) has no known provenance but adheres stylistically to the fashions of the 1780s-1790s. It is made from a course red wool with brown wool facings, cuffs, and stand-and-fall collar, and these colors might be interpreted as the reverse colors of a musician’s coat for a uniformed militia company. Yellow metal buttons are set in pairs down the nonfunctional lapels and around the cuffs. It closed with a hook-and-eye at the lower chest. Shoulder tabs are brown above and red below, and a line of brown fabric across the top of the arms simulates wings. It is cut short in the style usually called a coatee, with small brown glazed wool turnbacks from the front with red hearts and vertical false pocket flaps (red wool trimmed in brown). While its style postdates the Revolutionary War, many details of its material and construction hint at those that might have been apparent in enlisted wartime coats.

Museum of the City of New York Coats

Two coats in this Museum, described respectively as a Continental Artillery coat (it is later) and a coat worn by Lewis Morris as Washington’s inauguration, are included in Fuss’s article but not online.

Two coats in this Museum, both blue regimentals with red facings, are included in Fuss’s article and catalogued as dating to 1785 and 1790, but without further photographs are difficult to analyze

A coat at The Valentine (Richmond, VA) is included in Fuss’s article and is red with white facings, round cuffs, and stand-and-fall collar. It has white metal buttons set in pairs, short skirts with turnbacks from the front and large red hearts, and red, trimmed wings at the shoulders. No photographs are online.

A coat in the Bennington Museum (Vermont) is included in Fuss’s article and is red with white facings, round cuffs with buttoned side slits, and a stand-and-fall collar with buttons at either side. Previously believed to be a captured British redcoat, is now correctly catalogued as a post-war militia coat. No photographs are online.

A coat in the State Museum of Pennsylvania (Harrisburg) is associated with John Nichols and is in Fuss’s article. The coat is blue with white facings, cuffs, and stand-and-fall collar and stylistically dates to the years after the Revolutionary War. No photographs are online.