This two-part post documents the basic details of 31 known eighteenth-century American military regimental coats. Though it is focused on coats used during the Revolutionary War (1775-1783), it also includes 17 uniform coats from the period immediately following the war because of their potential to provide useful contextual evidence both now and in future study and to help avoid future citations of these garments as true Revolutionary War uniforms. This survey does not include coats made and worn in the late 1790s or those worn by French, Hessian, or British regular army officers and men, in order to focus on coats known to have been both made and worn in American (including Canadian) contexts. Nor does it include various other upper body garments worn by Revolutionary soldiers, such as hunting shirts (see the work of Neal Hurst) and civilian coats and jackets worn into battle or violent situations (see, for example, posts about the Obadia Mead jacket on this blog).

These posts are a starting point for conversations rather than a comprehensive survey. Most of the details discussed here were gleaned from photographs and catalog records rather than personal study, which would allow for expanded conclusions and connections. The author would welcome correspondence with anyone who knows more about the coats documented here or other examples.

Several of the entries benefitted from a systematic survey of museum collections conducted by historian Norm Fuss, published in The Brigade Dispatch (August 2010 and Winter 2010). Thanks especially to Keith Minsinger (whose initial research inspired this survey), Henry Cooke, Neal Hurst, Michael McCarty, John U. Rees, and Matthew White for comments.

This coat, in the collection of the Canadian War Museum (Ottawa), is associated with Jeremiah French, a New Yorker who served (after 1781) in the King’s Royal Regiment of New York (raised in Montreal). French was born in New York about 1737 and fled to Canada in 1776 or 1777, joining the Queen’s Loyal Rangers shortly afterwards. The coat is red with blue facings, with functional facings, cuffs, and cape. It is cut short in the style usually called a coatee, with small white turnbacks from the front with blue hearts and vertical false pocket flaps. It features bone buttons wrapped in gilt metal stamped with a crown, KRR, and New-York, surrounded by a wreath. These buttons are set in pairs behind gold metallic embroidered buttonholes. The appearance of the coat adheres to late 1770s-early 1780s fashion.
Munson Hoyt Coat 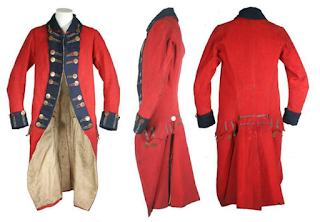 The coat, in the collection of the Connecticut Historical Society Museum andLibrary, is associated with Munson Hoyt, an officer in the Prince of Wales American Regiment. Hoyt, from Norwalk Connecticut, likely wore this coat during his service as a Lieutenant in the regiment (raised in Connecticut) between 1777 and 1783 in New York, New England, and South Carolina. The coat is red with blue facings, with functional facings, cuffs, pockets, and cape. It features plain yellow metal buttons set in pairs on the facings behind metallic embroidered buttonholes. The appearance of the coat adheres to late 1770s-early 1780s fashion. 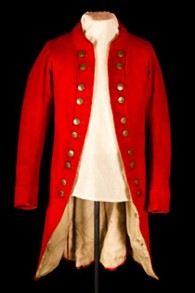 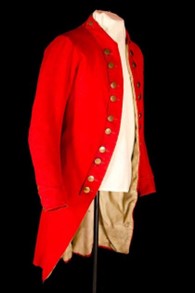 This coat, in the collection of the Missisquoi Museum (Quebec), is associated with Andres Ten Eyck. Ten Eyck was born in 1727 in New Jersey, served in the colony’s militia in the Seven Years’ War, and moved to New York in 1770. Arrested there in 1776 while recruiting soldiers for a Loyalist company, he was imprisoned and eventually escaped to Canada. The coat is red with functional red facings with bastion tops currently buttoned over the cap. It has plain round cuffs with no buttons, and current photographs suggest there are no turnbacks or pocket flaps, though the sides of the coat are obscured. It features plain yellow metal buttons set in pairs on the facings behind sewn buttonholes. Despite theories that this may have been Ten Eyck’s Seven Years’ War regimental, its appearance adheres to late 1770s-early 1780s fashion. 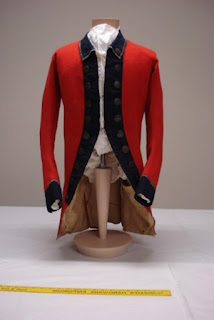 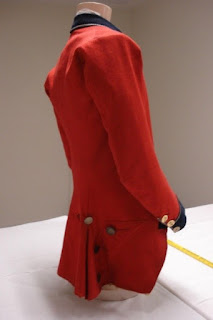 This coat, in the collection of the Bayville Historical Museum (New York), is associated with Penn Weekes, a resident of Oyster Bay, Long Island. According to Museum records, in at least 1779, Weekes was a sergeant in a Loyalist cavalry unit commanded by Captain Israel Youngs. The coat is red with blue facings, with nonfunctional facings, a functional cape trimmed with metallic lace, and nonfunctional cuffs trimmed with metallic lace that rise to a point in the front and open via a functional, buttoned slit along the rear seam. It is cut short in the style usually called a coatee, with vertical false pocket flaps. Current images do not indicate the presence of any turnbacks. What appear to be plain, white metal buttons are evenly spaced down the lapels. The cuff buttons have been replaced by later military ones. The appearance of the coat adheres to late 1770s-early 1780s fashion. 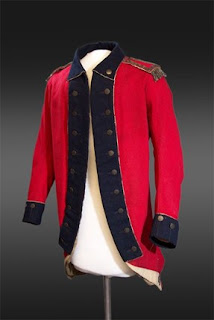 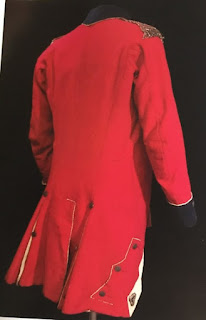 This coat, in the collection of the Neville Public Museum of Brown County (Wisconsin) belonged to Charles Michel de Langlade (1729-1801), a resident of Michilimackinac and Green Bay. Langlade had an impressive career in the fur trade and military service in the Great Lakes and served during the Revolutionary War in the British Indian Department wearing this coat. The coat is red with blue facings, with functional facings, cape, and cuffs, trimmed throughout with white piping. It is cut relatively short, with vertical false pocket flaps and small white turnbacks from the front with blue laced hearts. What appear to be plain, white metal buttons are evenly spaced down the lapels. Two epaulettes of red cloth with gold lace and fringe are on the shoulders. The appearance of the coat adheres to late 1770s-early 1780s fashion. 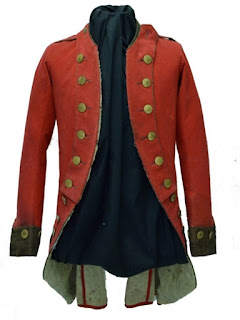 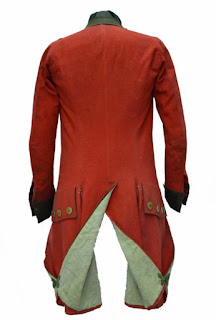 This coat, in the collection of the Niagara Historical Society and Museum (Ontario,Canada), is associated with Daniel Servos (1743-1808), a Loyalist in the British Indian Department. Servos was born in Tryon County, New York, and was commissioned a lieutenant about 1779. The coat is red with red lapels and green cape and cuffs. The functional red lapels extend only down to the belly, in a style most often associated with French uniforms, and have bastion-shaped tops buttoning over the cape. Below the lapels, three buttons with false buttonholes are on either side of the coat front. The coat has full white turnbacks with small green hearts at the corners. The cuffs appear to be nonfunctional; the deep pocket flaps are functional. The coat features plain red tabs at the shoulders and large, evenly-spaced plain yellow metal buttons. Besides the strange lapels, this coat adheres to late 1770s-early 1780s fashion. 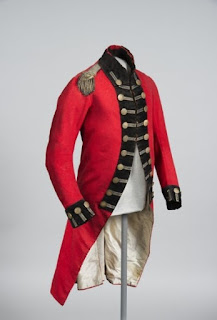 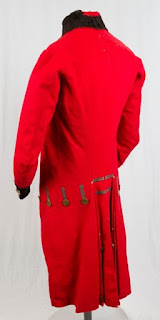 This coat, in the collection of Fort Ticonderoga (New York), belong to Jacob Schieffelin (1757-1835). Schieffelin was born in Philadelphia, served as a lieutenant in the Detroit Volunteers (Loyalist), and was captured at Fort Sackville in 1779. Later in the war, after escaping, he served in the Queen’s Rangers and British Indian Department in Canada. The coat is red with black velvet lapels, cape, and cuffs. It closes at the chest with hooks and eyes. The collar is relatively high, almost stand-and-fall, and the buttonholes are all worked with metallic lace. The coat has full skirts without evidence for turnbacks and false pocket flaps with laced buttonholes and buttons. It retains a gold metallic epaulette on the left shoulder and features plain brass coin buttons. Fort Ticonderoga dates this coat, stylistically, to 1783-1784.

This coat, in the collection of the Nova Scotia Museum, is associated with John Legett. Leggett was born in North Carolina in 1742, Leggett served as a provincial officer through the Revolutionary War before emigrating to Canada. The coat is red with blue facings, round cuffs, and cape. Gilt “RP“ buttons are set in pairs behind buttonholes worked with metallic lace. The coat retains two gold epaulettes and has full skirts. No photographs are online. 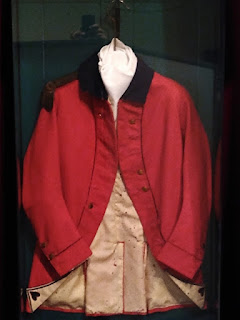 This coat, in the collection of the State of New Jersey and on display at Washington Crossing State Park, has no known provenance. The coat is red with matching functional lapels and slit cuffs and a dark blue wool functional cape. The lapels and cuffs are trimmed with a narrow strip of dark blue wool and the coat features buttons of gilt metal over bone cores. The coat has small, white, false turnbacks from the fronts with decorative multi-colored hearts at the corners. It has two welt pockets inside the skirts and no exterior pockets or pocket flaps. This coat adheres to late 1770s-early 1780s fashion. 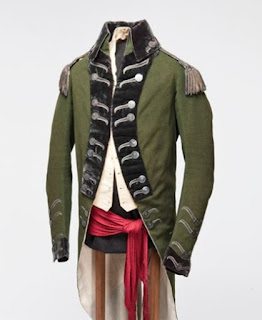 This coat, in the collection of the City of Toronto Museums (Ontario) belonged to William Jarvis of the Queen’s Rangers in 1791. Jarvis was born in Connecticut and joined the Queen’s Rangers in 1777 before eventually emigrating to Canada. The Museums’ catalog suggests that an original receipt for this coat may survive. The coat is green with dark velvet facings, cuffs, and stand-and-fall collar. Its lapels are functional and extend only to the lower chest (with laced buttonholes below) It features two silver epaulettes, silver laced buttonholes and trim, and white metal buttons set in pairs. It has long skirts but the single photograph online does not include a rear view or information about pockets.

Other Fragments and Future Research

At least two other likely Revolutuonary War regimental coat fragments exist. One, probably the sleeve cap of a blue regimental coat with hand-sewn stitches still present, was found in a cartridge box and is in the collection of Don Troiani. The other is reportedly a complete brown wool sleeve from the coat of a Philadelphia Associator, complete with a red wool cuff and retaining large pewter buttons at the top of the cuff and up a false slit, in a private descendant collection. In addition, various unsubstantiated reports and collector lore hint at the existence (or past existence) of more coats and fragments in private collections, discarded by button collectors, uncovered in shipwreck salvages, and so on. It is quite likely that more coats survive in public and private collections awaiting identification. Such examples have the potentially to greatly expand what we know about the coats made and worn in the Revolutionary War.