Around June 24 or 25, 1777, John Mills, a swarthy, twenty-year-old New Jersey native deserted from George Ross’s company of the 11th Pennsylvania Regiment. Mills was one of thousands of Revolutionary War deserters. What made him unique, at least among runaway ads for these sorts of soldiers, was one of his garments. Two advertisements appeared from Mills that summer, both in the Pennsylvania Packet. One noted his “white Continental jacket” and the second “a white Continental under ditto [jacket].” 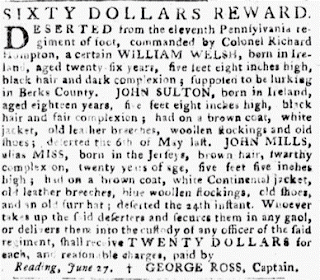 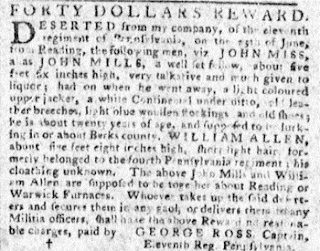 These are the only references to a “Continental jacket/underjacket” I’ve encountered, and Captain George Ross certainly meant some sort of waistcoat (that's what these words usually referred to). But what made it Continental? Was it unique in its cut, material, or buttons? Perhaps it was one of the short-cut, belted waistcoats that were becoming popular among American soldiers. Or perhaps it was something else entirely, whether some peculiar uniform or a more mundane garment with a label unique to Ross’s vocabulary. Without more evidence, it’s impossible to say. If you’ve ever seen another reference to such a garment, I’d love to hear from you.
Posted by Tyler Putman at 3:09 PM