In May, after a couple of weeks telling visitors that tentmakers in Williamsburg produced several hundred tents in the early months of the American Revolution, I began wondering just how long it took to make one common tent. Our shop probably contained the highest concentration of somewhat experienced handsewn tentmakers since the early nineteenth century, and that provided a unique chance to undertake some experimental archaeology, the process by which scholars attempt to recreate historical practices to learn about the past. By late June, we'd completed three common tents. We could have kept track of the hours we invested in each, but we all liked the idea of replicating a concentrated eighteenth-century work day, along with the focus arising from a deadline. Such work days, of course, began early to take the best advantage of daylight, and lasted until early evening. I suggested we might attempt to make a single tent in one day, and my coworkers enthusiastically agreed to the experiment. As a compromise to our modern sensibilities, we decide to only work until we had completed one, rather than sewing through a full day into the evening. Most of us estimated that we could easily finish it before the end of our usual work day at 5:00, if we started early.

Of course, when I dragged myself out of bed at 5:30 A.M. on Monday morning (June 22nd), I felt somewhat less enthused about the idea, with no one to blame but myself.

For the purposes of this project, we decided to make a common tent measuring 7' by 7' by 7', the standard set forth by the Continental Army in 1781 (you can find more details in John U. Rees's great article series here and here). We used fabric hand-woven in the weave room here at Colonial Williamsburg. At 42" wide, it matches George Washington's marquee linen width, but probably exceeds that of materials typically used in common tents. Rather than trim the fabric narrower and lose the clean hand-woven selvage typically incorporated in original tent seams, we chose to use the fabric at hand. This meant that instead of sewing two long body seams, as we'd done in our previous three tents, we only had to do one, something that should be kept in mind when considering the data below. 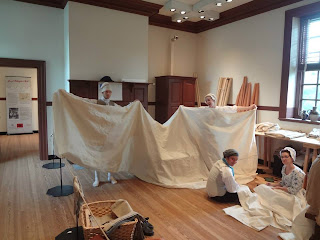 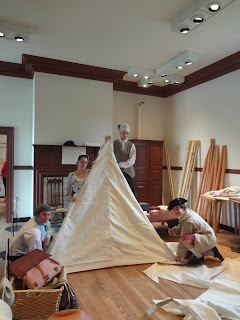 Showing the completed back.

We began rolling out the fabric for cutting at 6:45 AM and put the final touches at the tent at 4:46 PM, just in time for a rather torrential but fortuitous downpour. Fortuitous, because it allowed us to prove, once and for all, that a hand-sewn linen tent does indeed shed water quite effectively. Inside our tent, it was certainly misty, but even without any post-weaving washing or stretching, our linen canvas proved remarkably water-resistant. As we've been telling visitors all summer, surface tension and natural fibers work magic in tents. 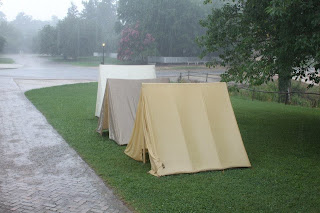 Our common tents, including (farthest away) our tent-in-a-day, baptized by a rainstorm.

As with any experimental archaeology, our results have imperfections. At various times during the day, we had folks out of the shop working elsewhere and setting up tents outside. Had all hands sewed all day, we would have completed our tent hours earlier. Another problem with our data lies in stitching speed. Although all of us in the shop hold ourselves to high standards, some work faster than others. This is true in any trade. As you'll notice in the figures below, it is possible to come up with an average sewing speed (all the times listed below are given in hours:minutes format for the total person hours in any given step). Given that we seamed and felled 822 inches of seams in 1480 minutes, our speed was just over 33" per hour (this is somewhat misleading; in any given hour, we'd actually be sewing a seam or felling it, and thus doing either of those steps at about 66" per hour). Interestingly, in both cases where I recorded seaming and felling times, they were about the same (Door to body: Seaming: 2:28, felling 2:27; Back to body: Seaming: 2:55, felling 2:42). However, you'll also notice that our speeds varied drastically, from 4:16 on a 15'10" seam to 4:40 on a 7' seam. Thus, our times should be read with care. Regardless of these details, we still felt a jubilant sense of accomplishment at having taken our raw material and, in the space of only ten hours, created a finished common tent. You can read more and see more images from the day on our facebook page. 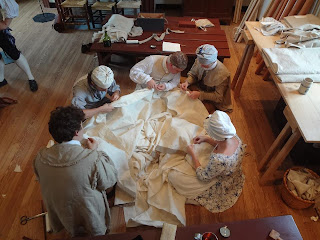 At work on the tent-in-a-day.

Besides proving that we could do it, what good does this sort of project do? First of all, it gives us raw data to answer all sorts of historical questions we have. How long did it take to make tents? How many people sewed tents in Williamsburg, given the output of tents from tailors' shops? How long did it take to sew Washington's tent, if we extrapolate from our times? How many people might have worked on that tent? We now have solid data, the first step in making educated conclusions. 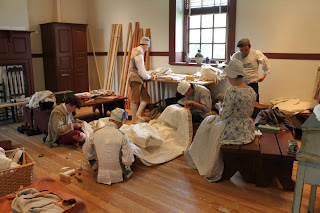 At work on the common tent.

Perhaps most importantly, the project provided and continues to give us an exciting interpretive opportunity for shop visitors. Yes, we had indeed been there since 6:30, we told countless people, and we were staying until we finished the tent. What you're seeing here, we pointed out, is unusual and exciting. Over the past couple of days, we've all enjoyed having a more immediate example to use in answering other visitor questions. How long does it take to make a tent? Well, that one right there took us ten hours. Were the tents waterproof? Not entirely, but that one set up out front did a pretty good job shedding water in Monday's rain. 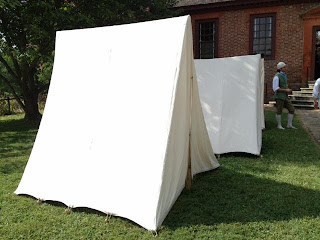 Our common tent the day after completion.

Our tent -in-a-day project was a great success on multiple levels, and I'm grateful to my coworkers for sharing my intellectual curiosity. I can't think of a better way to have spent a day in our shop, or a better group of people with which to sew and with whom to (at the very end) cram into a handsewn tent in the middle of a rainstorm. 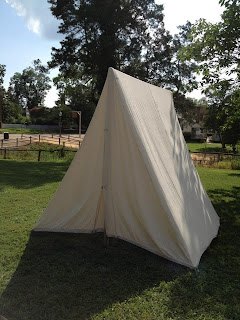 Update: For those interested, our tent weighs 13.5 pounds, just a bit more than the twelve pounds stated in a 1778 letter (John U. Rees cites it here in his discussion of tent transportation). Regarding construction, had we made a more typical three-panel tent out of narrower linen, we would have sewn another 15' 10" seam and two shorter seams to piece the back. This would have added at least seven work hours to the final tally.
Posted by Tyler Putman at 8:08 PM