Last weekend, Nicole and I took a trip up to Brooklyn, New York, to hunt for a wedding band. But along the way, we stopped at two historic houses, the Old Stone House in Washington Park and the Wyckoff House, farther east. We had read that the Wyckoff was hosting a "Free Family Day," and there's nothing that says grad-students-about-to-get-married like "free." So, with no family in tow to excuse our visit, we found our way there.

The Wyckoff House is a remarkable survival. Built about 1652, it is the oldest building in the boroughs of New York City but also the entire state. Like many houses, it was modified, repurposed, and eventually sold out of the family (eight generations after its construction). For most of the twentieth century, it was neglected, until it finally ended up as a gas station storage shed after the Second World War. Some years later, a descendant of the family happened to take an interest in it, galvanizing other relatives to fund its purchase, restoration, and donation to the City of New York. Today, you can tour several rooms of the house, each furnished in the style of a different historical period. 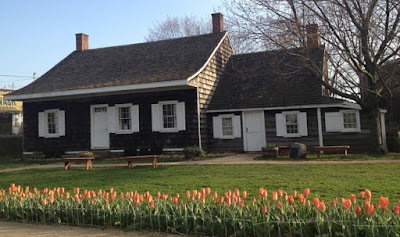 And tour we did. Our leader was undeniably knowledgable, informative, and exceptionally poised when faced with a full tour group that included several distracted children. Our tour was meticulous and logical. We began in a kitchen space, the oldest portion of the house, evocative of the sort of one-room kitchen-bedroom-parlor-workspace in which many early New Yorkers lived. We talked about Dutch building techniques and seventeenth-century cooking equipment. In the next room, an eighteenth-century addition, we discussed the conspicuous consumption evoked by ceramics displayed in a wall cupboard. We ended in another room, where the guide showed us photographs from the twentieth century of the surrounding neighborhood and the delapidated house as it appeared in the 1970s before its restoration. The tour ended, and we were released to the grounds.

But something about this one made me realize just how many missed opportunities lurked in a half hour inside the Wyckoff House, or inside most old houses for that matter.

Part of what got me thinking about missed opportunities was our remarkable tour group. It included an African-American family with three children, the mother of whom taught special needs students at an elementary school just down the road; a white mother with her young daughter; a South American family whose adult son had visited the house several times before and was now bringing his parents and siblings, for whom he carefully translated the guide's remarks; and us, two white graduate history students from Delaware. Why does this matter? Because it's a far more racially and ethnically diverse group than I've seen in most other tours I've gone on. And yet we didn't talk at all about New York's history of race relations. Did Pieter Claesen (later Wykhof/Wyckoff) own slaves? Did his neighbors? How did this part of Brooklyn, Canarsie, go from being a Dutch agricultural center to and African-American neighborhood? What better place to talk about demographics, enslavement, emancipation, and even white flight?

The Wyckoff House is doing something right, even if it's just by the accident of its location, in a diverse part of Brooklyn. But our tour guide never asked us about ourselves. And what stories we might have told. Why would a South American bring his entire visiting family to the house of a seventeenth-century Dutch New Yorker? What was it about this place that he found so compelling? Was it that Pieter Claesen himself was an immigrant to New York? Or was it that for this man, this house symbolized something else about the past or present of the place where he lived? What better place to talk about immigration in all its historic and contemporary incarnations than the home of one of New York's earliest European immigrants?

Pieter Claesen came to New York as an indentured servant, we were told. Nicole and I knew automatically what this meant, but most visitors wouldn't. How in the world did someone manage to come to New York in the seventeenth century, having literally sold themselves into a period of servanthood, and then, in the space of only fifteen years, manage to acquire substantial acreage in Brooklyn? Was this sort of upward mobility common or rare in this period? What does it say about New York's history of hopeful aspiration? What does it say about false promises? What does it say about the history of social class in America? What better place to talk about what New Yorkers, native and adopted, hope to achieve in their lifetimes?

And speaking of natives, where were the previous residents of the property? Yes, Pieter Claesen and his wife, according to the museum's website, "acquired a farm" here in 1652. But this place was more than vacant land. For thousands of years, as you can read about at the Manahatta/Welikia Project, Native Americans had lived, worked, worshipped, and died on the land that would become New York. What happened to them? They certainly didn't just disappear or go quietly into the night. As historian Russell Shorto has traced, early Dutch settlement in New York was made all the more complicated by peaceful and violent interactions with the original New Yorkers, Native Americans. But these people, whose homes had been on the Wyckoff property for centuries before Pieter Claesen ever owned it, didn't get a mention on our tour. What happened to them? What did people like Claesen think about Indians, and what did Indians think about them? What better place to talk about cultural contact, interethnic exchange, and the mysteries of prehistory? 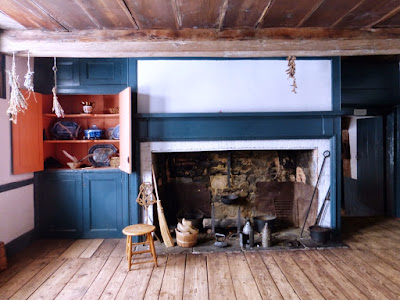 The Wyckoff Parlor, from Not Intent on Arriving.

And then there was the size of our group. We had something like fifteen visitors. And as we stood in what had once been the only room of a seventeenth-century house, the docent dutifully pointed to a linen bed ticking in the corner and explained that everyone - seventeen residents at one point - also slept in this room at night. Here we were, standing in the middle of a room with nearly that many people. Why not have us all lie down for a moment? Why not give it a try, and see - feel - what it was like to lay down in a room with that many people? What better place to talk about changes in living arrangements, personal space, and comfort than a room that was once home to as many living, breathing humans as stood in that tour group?

As we moved into another room, our guide pointed out the back window, explaining that the topography of the site itself had changed substantially since the seventeenth century. Where we looked out now on a steep embankment leading up to a street and a scrap yard, Pieter Claesen would have seen a wide expanse of flat salt marsh. But in the twentieth century, (in)famous city planner Robert Moses instigated a series of construction projects that included, among other things, filling in bottomland in the neighboring to facilitate construction. By some happy accident, this infill tapers off just out the back door of the Wyckoff House. But on our tour, that fact was simply that - a fact. But who was Robert Moses? What did his choices have to do with his ideas about politics, the city, and race (on the latter, see Robert Caro and Langdon Winner, and Bernward Gorges)? This place was very nearly buried by the vision of one New Yorker. What better place to talk about the city's complicated rural and urban history and its equally complicated future?

As we left the house, I was reminded again about its location. Today, the Wyckoff museum sits on less than an acre of land in a busy and relatively gritty section of Brooklyn. Rowhouses, a scrap yard, a used tire dealer, and other small businesses are now its neighbors. The prevalence of Caribbean restaurants and accents suggests that this neighborhood is no less made up of new New Yorkers than it was in the 1650s. But the Wyckoff House is physically, almost painfully, segregated from the rest of Canarsie by a tall iron fence. 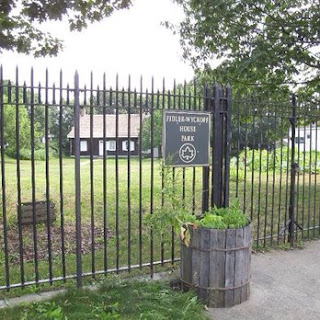 The Wyckoff House, from Yelp.

As someone who has worked in and loves museums, I understand this. The house has little security, and it would be much harder to close and lock its shutters at night than it is to lock a large iron gate. What if someone smashed a window, lit a fire, spray-painted graffiti on its walls? All of these are very real risks. So the house sits in an oasis of grass, surrounded by a protective fence.

But this is perhaps the greatest missed opportunity of all. The Wyckoff House has literally walled itself off from its community. Instead of presenting itself as a welcoming, receptive, open member of the neighborhood, it is instead a fortress of capital-h History, accessible only to those with the time or inclination to pay a small fee, take a short tour, and look at an old house.

Museums should be in the business of tearing down fences. And I mean that in two ways. We should be removing the barriers between the present and the past and between people like me and the South American man on our tour. Both of us came to see an old house. Surely we have other things in common.

But also literally. Imagine a Wyckoff House that instead of being surrounded by a  fence was simply on open land. What a valuable commodity in Brooklyn. Let people actually use the few picnic tables that now sit neglected inside the fence line. Instead of wide expanses of barren, unused grass, why not plant a field of wheat or corn? The property, according to the museum, includes "1.5 acres of some of the last remaining farmland in Brooklyn." Why not farm it, actually make it farmland, even if in a small way? Imagine how strange, how thought-provoking, how bizarre a passing pedestrian would find a field of oats growing in Brooklyn. Certainly more thought-provoking than grass.

The Wyckoff House is doing as well as can be expected from a small house museum. They host school groups, family days, and a country fair. They are working with what I'm sure is a shoestring budget, a skeleton staff, and a community with many other concerns besides historic preservation. Many of the things I've said about their tour in particular are applicable to any number of other historic houses across the country.

Too often, though, we forget that our job as public historians is not really to explain architecture or herb gardens or furniture styles. Our job is to take down fences and ask uncomfortable questions, using the past as a starting point. It's dangerous. People might argue with you. They might tear up your planted field. They might leave litter. They might deface a building. But others might just stop to read a sign or look at this beautiful old house and wonder, even if for just a moment, where it came from. What happened in this place? Who lived here? How did this house survive? What was New York like back then? What is it like now? What will it be like in another three hundred years?

Aren't those questions worth the risk?
Posted by Tyler Putman at 10:52 AM