Some projects languish for a while, waiting for your attention. Such was the case with an old pair of "slops" that I made in 2005. Back then, I constructed them somewhat clumsily and used cotton thread not suitable for the period of living history I use them for (say 1750-1800). When I finally got around to reconstructing them using linen thread recently, I started to wonder what we actually know about these things. Most reenactors call them "slops." But, as it turns out, almost no one did in the eighteenth century. 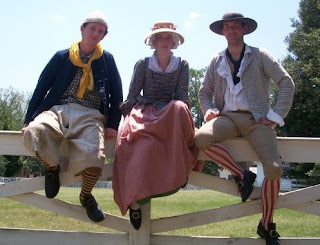 The author wearing his "slops" at left, with Gwendolyn Basala and Michael McCarty

In the 1799 image below is pretty typical. What we might call "slops" are the thing the guy is wearing that looks something like a white kilt. It's hard to tell in this image, but they're actually two very wide legs attached to a waistband. "Slops" are the sort of garment we associate with sailors and pirates, and you may have seen then being worn by a reenactor, a living historian, or a film extra. 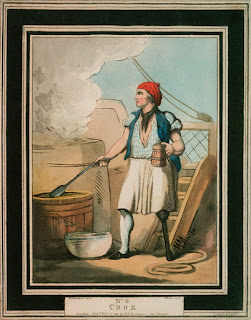 In the the eighteenth and nineteenth centuries, "slops" actually meant all sorts of clothing, not just this type of garment. I wrote a thesis and published an article about "slops" in general, the sort of ready-made garments (coats, jackets, trousers, and so on) sold to and worn by sailors and working men. The Museum of London owns a set of early slops, perhaps worn by a mariner, that includes a shirt and pair of baggy breeches. Their provenance is unclear and they are difficult to date with so few comparable extant garments. There are certainly images of sailors wearing similar clothing in the seventeenth and early eighteenth centuries, some prints of which you can see here. Breeches of this type, the forerunners of later sailor garments, relate directly to the baggy breeches worn by men of all sorts in the seventeenth century. 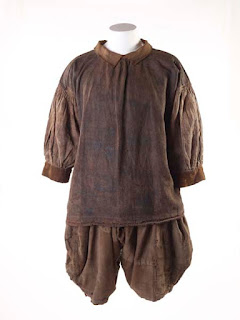 By the late eighteenth century, when men of all social levels were wearing tight, knee-length breeches, baggier protective legwear seems to have been used exclusively by sailors, becoming somewhat inseparable from the image of seamen as they appeared in popular media. You can see such garments in sketches, popular prints, and paintings. 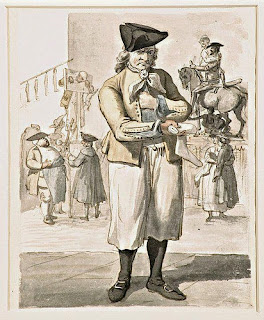 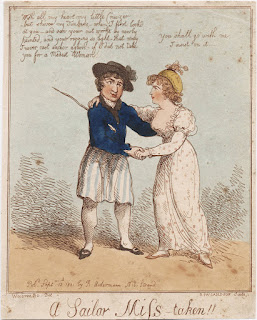 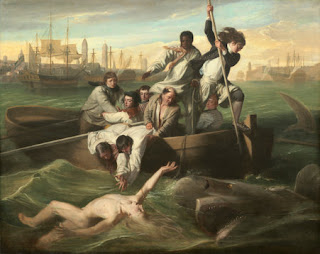 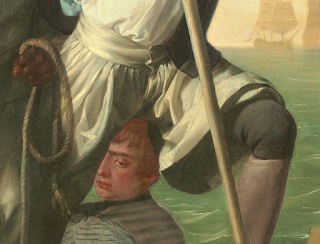 "Watson and the Shark," John Singleton Copley, 1778, from the National Gallery of Art.

The only extant example that survives from the period between 1750 and 1815 is fragmentary, recovered recovered from the 1785 shipwreck of the British vessel General Carleton (you can download the report and see an image of one of the fragments here).

There are precious few documentary references to these garments. Copley's painting is the most detailed evidence we have, in fact, for their construction and use. Notice the pleating, for example, and the fact that the sailor is wearing them as a protective garment over regular breeches.

We don't know a lot about these garments. We don't even know what to call them.

Famed eighteenth-century dictionary writer Samuel Johnson defined slops as "Trowsers; open breeches" (here). But I've yet to see "slops" used in a period document to refer specifically to this type of garment rather than ready-made clothing in general. The term "skilts," also a somewhat common label for this garment among maritime reenactors, didn't appear in print until the 1840s (according to the Oxford English Dictionary).

So what did people call these things?

I had thought for some time that they used "petticoat breeches," a term for an earlier type of legwear, but when I recently went searching in period sources, I couldn't find any instances of it in descriptions from the late eighteenth or early nineteenth centuries. Terms like "sailor trousers" appeared frequently in print, but they most often seem to mean a particular cut of trousers (or even ankle-length trousers in general, often associated with sailors in the earlier part of this period when most men still wore knee-length breeches). As Ike points out in the comment below, it's very possible that "trowsers" meant both ankle-length pants and knee-length "slops." The only instances I've come up wit that definitely refer to the latter are a handful of period references to "petticoat trowsers." Still, I think these instances do probably refer to the type of knee-length garment that appears in visual sources.

Servant and former privateer James Wickrey, who ran away from his master in Chester County, Pennsylvania, in 1749 was wearing "petticoat trowsers, half worn" (The Pennsylvania Gazette, June 8, 1749).

An enslaved man, "who commonly call[s] himself Robert Heart amongst his own Colour" but whom his master called only Bob, had "a Pair of Petticoat Ozenbrigs Trowsers" when he ran away from Cecil County, Maryland, late in 1765 (The Pennsylvania Gazette, December 5, 1765).

John Hilt, a Dutch brick maker who skipped bail in Philadelphia in 1766 with "Cloathing much like a Sailor... and frequently wears Petticoat or Sailors Trowsers in the season." (The Pennsylvania Gazette, April 3, 1766). 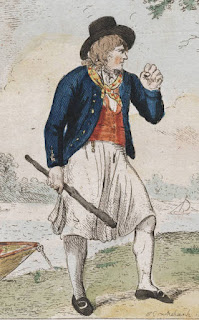 Detail, "My Poll and My Partner Joe," Isaac Cruikshank, 1799, from the Lewis Walpole Library.

The two British criminals in the links offered by Ike in his comment below were both sailors who wore "trowsers" over breeches. But only James Wickrey among the individuals listed above had any other type of legwear noted (in his case, leather breeches).Were others wearing something underneath their petticoat trousers, like the sailor in Watson and the Shark, or did they wear nothing else at all besides shirttails? Were petticoat trousers really as common among early nineteenth-century sailors, men who might have chosen more fashionable ankle-length trousers, as satires would have us believe? Did anyone use the feminine idea of petticoats to deride wearers of petticoat trousers? They may have been baggy partly because of the shape of earlier breeches styles that inspired them and partly so they could fit over other garments. But they didn't have to be as baggy and skirt-like as they were. How did fashion and function interact when it came to petticoat trousers? Did more men than just bricklayer John Hilt adopt them as a sort of affectation, mimicking real sailors? Did they fall out of favor because men began to wear ankle-legth trousers instead of breeches, or for some other reason?

Mysteries remain for curious researchers. Let me know if you find any answers! I'm still not sure petticoat trousers was the only phrase people used to describe these garments, or that there aren't mentions of "slops" in this specific sense or some other term people used to refer to them lurking in period documents. But I do know that the words we choose to describe the past matter. John Hilt didn't wear skilts or slops. He wore petticoat trousers. If we're not careful, we might end up talking about people like him using words they wouldn't even understand.
Posted by Tyler Putman at 6:35 PM