Part of an intermittent series featuring "occupational" images that have appeared online.

A peculiar letter appeared in the Cobourg (Ontario) Star and General Advertiser in 1831. It was signed by "The Trent Bridge," which spanned a nearby river. The bridge complained of its mistreatment thus:

"But my misfortunes have been brought upon me chiefly by an incorrigible, though perhaps useful, race of mortals called LUMBERJACKS, whom, however, I would name the Cossacks of Upper Canada, who, having been reared among the oaks and pines of the wild forest, have never been subjected to the salutary restraint of laws. The injuries which they have done me have been marked by wantonness and ingratitude; for to them I have been hitherto chiefly useful.

"One night (I shall never forget it) a band of these foresters having reached the foot of the Rice Lake upon a raft, they secured, as they thought, their charge on the shore; and being all votaries of Bacchus and tormented with an incessant and unextinguishable thirst, they adjourned to a tavern to spend the night in the worship of the jolly god. Meantime the huge raft, being no partaker of their orgies, took its revenge by breaking from its moorings and (dreadful to relate) entered the TRENT without a pilot. What was my consternation, Mr. Editor, when the great mass of timber came floating on, like an island, or like the Kraken, that vast sea-monster, which was seen and described by the Danish Bishop of Pontoppidon. On it came, and right against my weak part it drove, giving it a lurch to leeward from which it has never recovered."

According to the Oxford English Dictionary, this 1831 letter is the first known occurrence of the term "lumberjack." The 1870s tintype below shows two such "Cossacks of Upper Canada," both carrying sturdy axes and wearing their work clothing. The man on the right even sports a warm and jaunty fur cap. 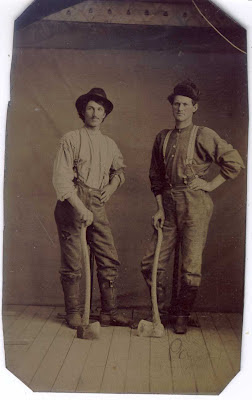